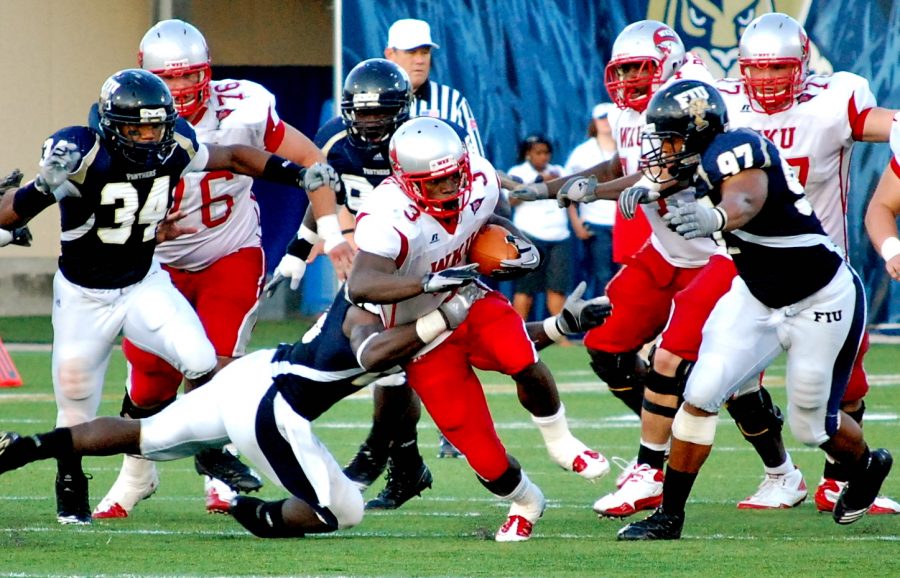 For the second straight game, junior running back Bobby Rainey didn't surpass the 100-yard mark -- but he was close. Rainey rushed for 94 yards on 28 attempts Saturday in WKU's 28-21 loss to FIU at FIU Field.

Following along with updates from WKU’s Sun Belt Conference opener at Florida International. Kickoff is set for 2:30 p.m. CT on Saturday from FIU Stadium in Miami, Fla.

WKU has a chance to tie, getting the ball at the FIU 36 with 3:07 left. Jakes had an open Willie McNeal in the endzone on 4th down, but McNeal dropped the pass to end the rally.

Bobby Rainey finished with 94 rushing yards. Kawaun Jakes was 14-of-31 for 193 yards and two touchdowns.

FIU controlled the game on the ground, rushing for 235 yards.

WKU’s offense suddenly awakes from the dead, as Kawaun Jakes hooks up with receiver Dexter Haynes for a 53-yard touchdown.

The Toppers are down just one score now, and this one is far from over.

WKU is about to get the ball back down two scores at its own 20-yard line.

FIU managed to knock four minutes off the clock on its last drive, and things are looking bleak for the Toppers.

It hasn’t been a very good day for WKU on either sides of the ball, never stopping the run or getting much going offensively.

FIU capitalizes on the fumble by Jakes with a 1-yard touchdown run by quarterback Wesley Carroll.

The Toppers will have to move down the field quickly if they want to get back in this game.

Jakes was unable to get much going on WKU’s last drive of the 3rd quarter, and he eventually fumbled the ball on 3rd and long at the Toppers’ own 33-yard line.

The ball was recovered by FIU, and a 17-yard run by Darriet Perry has the Golden Panthers in the red zone. They’ll try to extend their lead when the fourth quarter begins.

WKU does force FIU to punt, but the Panthers pinned WKU on its own 3-yard line. The Toppers will have 97 yards to go if they want to tie this game.

The Toppers milk over seven minutes off the clock, but finally cap off the long drive with a 1-yard touchdown by Kawaun Jakes on a QB sneak.

Jakes was sacked on third down earlier in the drive, but FIU got a costly defensive holding penalty to negate the play.

WKU will try to get a stop now, a task they’ve had some trouble with today.

The second half starts just like the first, with a three-and-out from each team. WKU freshman safety Kiante Young had the hit of the game just moments ago, sticking T.Y. Hilton in the backfield on a screen pass.

WKU will take possession after the TV timeout, trying to rally.

The Toppers advanced all the way down the FIU 2, and eventually chose to take a shot at the endzone with 3 seconds left instead of kicking a field goal.

Kawaun Jakes threw his pass attempt to Jack Doyle out of the back of the endzone, and WKU heads into the locker room down two scores.

FIU outgained WKU in total offense 243-132 in the first half. The Golden Panthers already have 142 rushing yards.

WKU finally gets on the board after a 9-play, 60-yard drive. Bobby Rainey had 24 rushing yards on the drive, and Jakes set up the score with an 11-yard scramble.

He then found tight end Jack Doyle on a rollout pass for the 6-yard touchdown.

This one’s starting to get out of hand. FIU marches 60 yards in just over two minutes to take a three-score advantage.

FIU quarterback Wes Carroll peppered the ball all over the field out of the no-huddle formation, and running back Darriet Perry picked up the 4-yard touchdown run.

The statistic breakdown will be extremely lopsided in FIU’s favor, and we’ll have those numbers for you at halftime.

Another explosive drive for FIU expands its lead. It was a 97-yard drive for FIU, highlighted by a 33-yard reception by T.Y.  Hilton and a 37-yard run by Darian Mallary. Mallary then scored from five yards out.

The Golden Panthers will be driving when the 2nd quarter begins. 89 rushing yards for FIU in that first quarter. Meanwhile, WKU has just 47 yards of total offense by my count.

True freshman running back Antonio Andrews had both his first rushing attempt and his first reception on the drive.

FIU picks up the pace on its second drive, going 73 yards for a touchdown in less than two minutes.

Kerrick Rhodes broke off a 39-yard run to get FIU in the red zone, and the versatile T.Y. Hilton then scored on a 12-yard reverse run.

Both teams go three-and-out on their first drives of the game.

WKU quarterback Kawaun Jakes completed a 5-yard pass to Marcus Vasquez, and running back Bobby Rainey rushed for 3 yards, but Jakes was sacked on 3rd and 2 to end the Toppers’ first drive.

— I’m told by WKU media relations that there are no changes to the Toppers’ starting lineup from the South Florida game.

That should mean that the new secondary of freshmen Tyree Robinson, Arius Wright and Kiante Young, and sophomore Kareem Peterson is still in place. It should also mean that offensive lineman Luke Stansfield is still starting in place of the injured Mychal Patterson.

Media relations confirmed that junior safety Mark Santoro, who has been nursing a neck injury suffered against Indiana, did not make the trip to Miami.