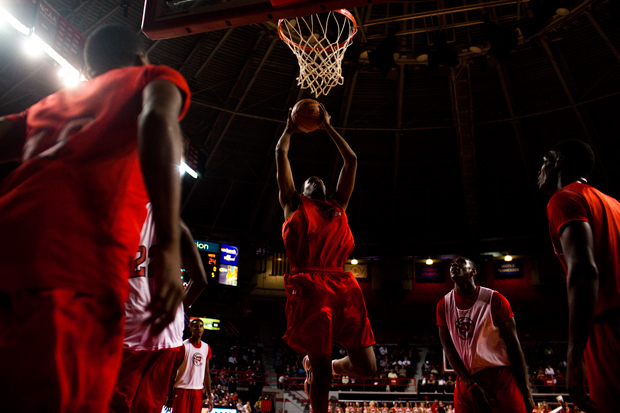 Look for updates and analysis from WKU's first of two exhibition basketball games from Diddle Arena. The Toppers tip against Campbellsville at 3 p.m. CT.

-About all you can ask for in terms of an exhibition for WKU. Campbellsville was competitive for most of the game before the Toppers pulled away to an 80-57 win at Diddle Arena. We’ll have more from the game, including postgame video, later at www.wkuherald.com. Thanks for following.

-Ken Brown will enter with 2:50 to play in the game. Juan Pattillo with a double-double now after a rough start. It’s 74-55.

–WKU now leads by 15, 70-55, after jumper in the lane by Sergio Kerusch. Tops starting to get up and down the court at good pace.

–Toppers back out to a 10-point lead after a three-point play by Cliff Dixon. A Kahlil McDonald 3-pointer made it 68-55 with six minutes to play.

–WKU leads 61-55 with 6:46 to play. Juan Pattillo in a groove with 15 points and approaching 10 rebounds. Steffphon Pettigrew leads the Toppers with 17 points.

-Toppers taking control of the pace now. On a run out to 54-46 after Campbellsville had made it a one-point game. Jamal Crook is really showing himself as a capable leader. He’s been the most vocal of anyone not named Ken McDonald so far.

–At the under-12 timeout, WKU leads 44-40. Looks like this could actually come down to the end. The game went to break after a called block on Steffphon Pettigrew. It was debatable. Attendance is listed as 2,523.

–Cliff Dixon on the ground for a jump ball about resulted in a scrum. Lots of whistles, no technical fouls. WKU leads 44-38 with 13:36 left.

-Juan Pattillo is starting to make an impact. Campbellsville pieced together a small run, but Pattillo has four points out of the half and two rebounds already. With 15:45 to play, WKU leads 42-35.

-WKU was 13-of-32 (40%) shooting in the first half. The four newcomers who have shot the ball today are a combined 4-of-16. The starting five will start the second half.

-Campbellsville’s Shawn Savage hits a 3-pointer with time running out, and the Toppers head to the locker room with a 36-29 lead. Steffphon Pettigrew leads WKU with 11 points. Campbellsville’s JaVaughn Espritt leads all scorers with 12 at the half. He also has six boards.

-Timeout Campbellsville after another sloppy couple minutes for both sides. Score remains the same with 16 seconds left in the half. The walk-on Gabbard continues to play without an appearance from junior guard Ken Brown.

-Campbellsville led briefly, 24-23 after a free throw, but it’s been all WKU since then. Now moving at a more controlled fast pace, the Toppers got a pair of run-out baskets as well as an old-fashioned three-point play by Jamal Crook. Still no Ken Brown. WKU leads 30-24 with 4:30 to play in the first. On the negative side of things, WKU is being out-rebounded 18-13 and Campbellsville’s JaVaughn Espritt has 12 points and five rebounds.

-Bad shot selection, rebounding, well, take your pick is haunting WKU with 5:51 to play in the first half. It’s tied at 23.

-They always say Caden Dickerson isn’t athletic, especially surrounded by WKU’s current cast. I beg to differ. He hit a 3-pointer to put the toppers ahead and broke a three-minute scoring drought.

-Former Warren Central high school star Monie Hudson has 5 points for Campbellsville, who trails 18-17 with nine minutes to play in the half.

-The only Topper not to play so far is junior point guard Ken Brown, who we haven’t been told is injured.

-Juan Pattillo hasn’t been strong so far. Two points and one rebound, then called for goaltending that made it an 18-16 game at the 10:19 mark.

-Good stuff by WKU out of the timeout. Sergio Kerusch hit a 3-pointer and Cliff Dixon finished a run-out with a dunk that erased Campbellsville’s only lead of the game. Everyone’s been on the floor so far except for junior Ken Brown and freshman Stephon Drane.

-Campbellsville nailed a pair of 3s out of the break to make it 11-9, and Ken McDonald took a timeout in response. Sloppy shooting thus far for the Toppers — really more sloppy shot selection.

-Steffphon Pettigrew scored quickly on WKU’s first possession, but the Toppers lacked a rythm until Sergio Kerusch entered for Caden Dickerson at the 17:11 mark. It was then that WKU spurted ahead on a 5-0 run, and the Toppers lead 9-5 with 15:57 to play in the first half.

-Also Mike Gabbard, the walk-on, entered wearing No. 55 with tape over the name. We’ll assume that’s Anthony Sally’s old jersey, and the only one that would fit Gabbard.

-Under way here at Diddle. The previously listed five did start. For what it’s worth, jerseys look to be the same last last year. WKU in white with red trim today.

-Was told by the way that Mike Gabbard, the walk-on, will dress and play today, but is not even for sure on the team yet.

-About 25 minutes from tip. There are a few Campbellsville players of local interest. Shawn Savage, Monie Hudson and Demetric Ray are from Bowling Green. Reggie Smith is from Louisville. Adrian Whelan is from Brandenburg, and Cameron Hall is from Glasgow. Not sure who is actually here, since Campbellsville seems to have brought just 10 players.

-There’s only so much you can get out of an exhibition, but here are a few things to watch in WKU and Campbellsville’s game today in Diddle Arena. Tip is at 3 p.m., and I’ll have plenty of updates and insight here.

Here’s what to watch for:

The Starting Five: There’s no reason for Head Coach Ken McDonald to not start his best five. It will say a lot about who he’s looking to go with at point guard, as well as how an overload of shooting guard and small forward prospects will fit in together.

The Newcomers: There are more guys on this team that haven’t ever suited up for WKU than those who have. Some will fit into the rotation — namely junior college transfers Ken Brown and Kahlil McDonald — and others might not.

Brandon Peters is an incredible athlete, but how about as a basketball player? It’s those sort of questions that need answering. Last season’s exhibition showed that those who were able to fit in and make plays typically did well down the road. For example, William Green was the only Topper not to score. Consequently, he didn’t play a regular-season minute and later transferred.

The Opponent: Of course, most everything could be a moot point depending on how much Campbellsville lets WKU learn about itself. Last season’s sole exhibition opponent, Xavier (La.), was somewhat of a joke.

Here’s what WKUSports.com has to say about Campbellsville:

Campbellsville, an NAIA school located in Campbellsville, Ky., returns three starters and six letterwinners from a 2009-10 squad that went 26-8, won the Mid-South Conference and finished ranked 7th in the NAIA. Keith Adkins is in his 11th season at the helm of the Tigers, and he has led the team to a 196-132 record in his tenure.