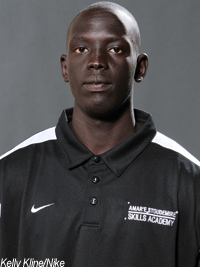 Deng Leek, a 7-0 center from the Wesleyan Christian Academy (N.C.), told the Herald on Friday that he has given a verbal commitment to play for Head Coach Ken McDonald at WKU.

Leek said he had most recently spoken with McDonald on Friday afternoon, when he gave his pledge.

A three-star prospect from the class of 2011, Leek joins Derrick Gordon as the second reported WKU commitment. Leek said he plans to sign his letter of intent during the NCAA’s Early Period, which begins Nov. 10.

A Sudan native, Leek said he holds close ties with WKU center Teeng Akol, who he played with at the same school in Africa. It was Akol, Leek said, who helped make the connection to WKU that led to his official visit the weekend of Sept. 18.

“They were like family,” Leek said. “Everyone was so nice — the players and the coaches — everybody.”

Leek was graded a 91 on ESPN.com. That recruiting expert said Leek’s “best playing days are clearly ahead of him.”

“Leek’s defense is definitely ahead of his offense but he plays with great urgency and affects the game with his ability to block shots and rebound along with wide open finishes,” the report said.