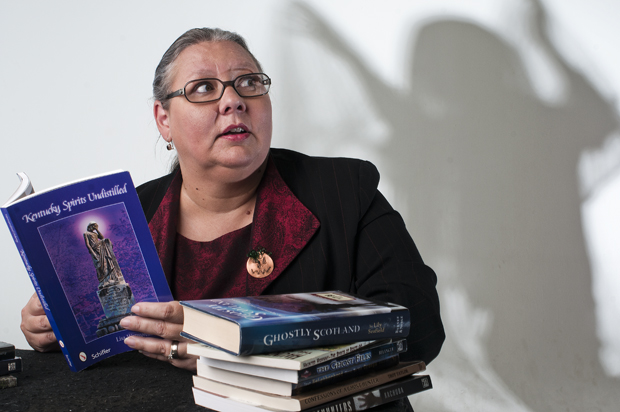 Tamela Smith, WKU's Interactive Video Service Manager, has been collecting WKU ghost stories since she was a student in 1981. Currently writing a book of WKU ghost stories, Smith says her favorite ghost on campus is the Van Meter ghost because so many people have had experiences there. JULIA WALKER THOMAS/HERALD

In the 1980s, when Tamela Smith was a police officer at WKU, she noticed something odd at Garrett Conference Center.

Smith was doing rounds one night near the fountain at the fine arts center. She glanced up at Garrett and saw a black male in a white T-shirt hanging by his neck in one of the windows.

Every night, she would travel to that spot and look up into the window to see the image.

Smith said she did some research and learned that the last lynching in Warren County was on a tree between Garrett and Cherry Hall. The victim was a black male in a white T-shirt.

“(The image is) not there anymore,” Smith said. “They have redone the building, and it is different now.”

There are more than 10 places on campus that have haunting stories, according to hauntedhouses.com, a website that directs users to “real” haunted houses across the country. Spots at WKU include the Kentucky Building, Potter Hall, Barnes-Campbell Hall, Pearce-Ford Tower and others.

A girl killed herself in Potter when the building was still a dorm, according to the website. The girl is rumored to have stayed around, banging on the pipe in the basement where she hung herself.

Smith was in Potter one night with another officer when the two were startled by a doorknob turning on its own and knocks at the door. Smith opened the door to find the room empty.

Smith isn’t the only WKU official who has had paranormal experiences on campus.

Howard Bailey, vice president for Student Affairs, was once the assistant hall director of Barnes.

In 1968, a freshly-showered fifth-floor resident assistant in Barnes was killed when he pried open the elevator door to flip a switch and get it to work, but was crushed by the elevator coming down.

When Bailey was the assistant hall director, he came across a discovery on a school break after all the students were gone. He had just swept the building and then went out to eat. When he returned, he went to the fifth floor to retrieve something from the RA’s room.

“When I arrived on the floor, I found all of the sinks on and a pair of barefoot, wet footprints leading from the bathroom to the RA’s room,” he said.

Along with Smith’s and Bailey’s experiences, there have been dozens of other experiences on campus, including students being chased by an entity in the yard of the Lambda Chi Alpha fraternity house, the haunted portrait of Mattie McLean in McLean Hall and the glowing blood stain of Van Meter Hall’s auditorium.

Despite all of the experiences, Bailey does not believe in ghosts. Smith, on the other hand, said ghosts are year-round for her.