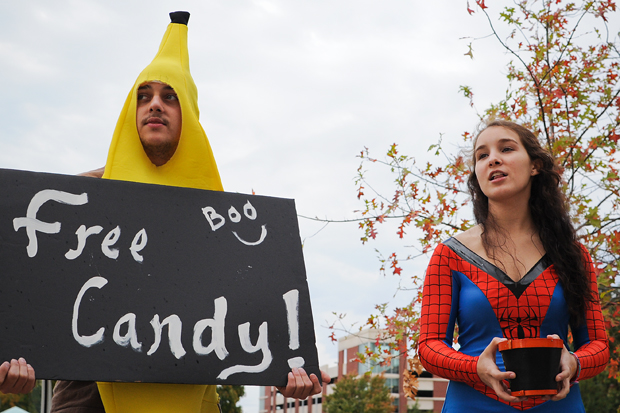 Andrew Tagliaboschi, a junior from Bowling Green, and Kelsey Luttrell, a freshman from Madisonville, hand out fair trade chocolates that come from Ghana. For this event the Wesley Foundatiuon and WKU AID partnered to raise awareness about the importance of fair trade products. The candy handout happened near Guthrie Bell Tower on WKU's campus on Monday, Oct. 25. JOSH MAUSER/HERALD

Trunk or Treat got a twist at the Guthrie Bell Tower on Monday.

The Wesley Foundation has done Trunk or Treat on campus for about five years, handing out candy to students to cheer them up and let them know the campus ministry is here for them, Wilson said.

But this year, they partnered with the WKU chapter of Americans for an Informed Democracy to give out fair trade chocolate for the first time, Wilson said.

“We’re making a difference for someone across the world who we’ve never met,” she said.

Madisonville freshman Kelsey Luttrell was handing out pieces of chocolate with Bible quotes attached to them to passersby.

Luttrell said the event is part of the Wesley Foundation’s mission to spread grace by putting a face to God’s love.

“Everybody loves free candy,” she said.

Matt Vaughan, a senior from Mexico, Mo., who is president of the WKU chapter of Americans for an Informed Democracy, said the group is trying to make WKU a fair trade community.

Products that are fair trade certified have met “strict economic, social and environmental criteria” in the production and trade of an agricultural product, according to the Fair Trade USA website.

They worked with WKU Restaurant and Catering Group to make fair trade chocolate available at the Bate Shop and the Pit Stop, Vaughan said.

One member of AID is also a member of the Wesley Foundation and came up with the idea of a partnership between the two for the Trunk or Treat event, he said.

The two groups are hoping to partner again, possibly for a similar event at Easter, Vaughan said.