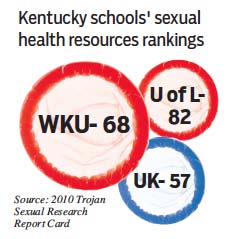 WKU’s score on a recent sexual health survey has gone down once again.

Trojan recently released a report card ranking 141 colleges and universities from across the nation in regards to their sexual health resources.

WKU, for the second consecutive year, went down in the rankings. The university dropped from 55th to 68th overall.

Schools are ranked in 13 categories, including contraceptive availability on campus, STI and HIV testing and sexual health awareness programs, according to the release from Trojan.

Bert Sperling, president of Sperling’s BestPlaces, an independent research firm in Portland, Ore., said the survey doesn’t look at the amount of sexual activity or condom usage on campus.

Instead, it looks at the availability of sexual health services on campus, he said.

Each campus’ health center fills out a two-page questionnaire about services available on campus, Sperling said.

Additionally, a group of recent college graduates evaluated each center’s website as if they were students trying to find information.

Sperling said a good website is important because it lets the center and the students communicate with one another.

The center also offers free HIV testing once a month, she said. Because of this, she’s surprised that WKU’s ranking went down.

Steward said Columbia University is consistently ranked at the top – including number one this year – because they have the “Go Ask Alice!” health education program.

There’s no reason for WKU to create a similar program because they can link to Columbia’s, she said.

Not every school needs to do the exact same thing, she said.

In the five years that the survey has been completed, Sperling said he has seen an improvement in resources available.

“I think there’s definitely an overall trend that there’s more info available for the students,” he said. “The more information and services available to the students, the more they can do to take care of themselves.”

Schools that want to improve their scores can review their questionnaires to see the kinds of things that are graded.

Steward said Health Services makes decisions regarding future services based on student needs and surveys, not the Trojan survey.