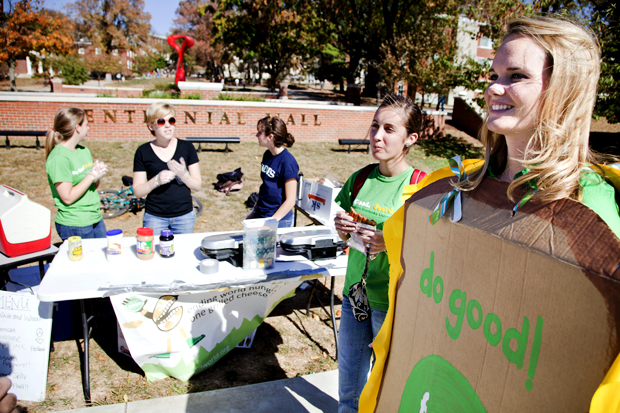 From right to left, Louisville junior Alex Kimura and Louisville sophomore McKenzie Croghan stand in front of the FeelGood table set up in Centennial Mall on Thursday afternoon encouraging students walking by to donate to receive a grilled cheese sandwich. Kimura, who started Feel Good at Western said that the group looks to empower the hungry to be self reliant. TIM HARRIS/HERALD

Every Thursday, the campus community might notice a person in a giant grilled cheese costume standing in the Centennial Mall.

The person behind the big sandwich is Louisville junior Alex Kimura, the president of FeelGood, a non-profit student organization that has been on campus since spring 2009.

FeelGood offers hand-made sandwiches and accepts donations, the majority of which go to a group called The Hunger Project, which “seeks to end hunger and poverty by empowering people to lead lives of self-reliance,” according to The Hunger Project’s website.

Group members make grilled cheese sandwiches, generally with a choice of three different types of cheese. Each sandwich gets two pieces of cheese, and kinds of cheese can be mixed and matched, Kimura said.

ARAMARK donates the bread, butter and cheese. The rest of the ingredients, which include peanut butter, marshmallow fluff and jelly, come from member donations, Kimura said.

Owensboro sophomore Taryn Thompson said she participates because she knows her contribution is helping people across the globe. She encouraged other students to get involved.

“Anything people can do helps – any donation is appreciated,” she said.

Owensboro sophomore Audrey Kaelin wanted to remind students how important helping others is.

“We are so fortunate and so blessed in a lot of ways,” she said. “We forget sometimes because we don’t see the poverty, but it doesn’t mean it isn’t there.”

FeelGood had a stand at Shantytown, last month’s event to raise awareness about homelessness.

The group also hopes to have a stand for tailgaters during a home football game, either on the South Lawn or in the new student tailgating area near Kentucky street.