Tops overcome sluggish first half for exhibition win over Campbellsville 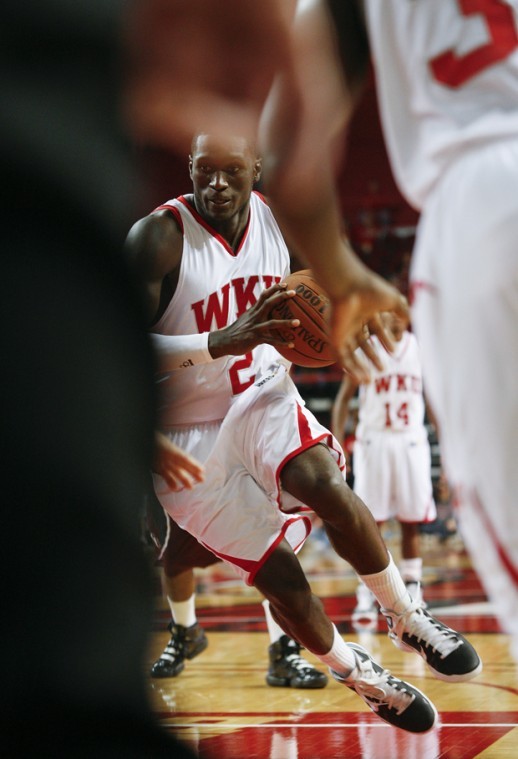 Senior forward Juan Patillo drives to the basket during the second half of Sunday's game against Campbellsville University at Diddle Arena. WKU beat Campbellsville 80-57 in their first exhibition game of the year.

It took the Toppers a while to get going Sunday afternoon, but once they did, they were able to wreak some havoc.

After visiting Campbellsville pulled within six midway through the second half, WKU rode a 21-4 run the rest of the way for an 80-57 win in its first exhibition game.

“I wasn’t really thrilled that it was such a close game,” Head Coach Ken McDonald said. “When that’s happening, I think our pride and our effort started to come out a little bit with the defense.”

The game was the first chance for WKU’s seven newcomers to play in a game situation in Diddle Arena, which senior forward Steffphon Pettigrew said caused some miscues.

“Coach Mac told us before the game that this wasn’t going to be a perfect game,” Pettigrew said. “It was the first time out there together, so we were just trying to get in a rhythm and work on the little things.”

Campbellsville hung tight with the Toppers in the first half, even taking a 24-23 advantage with 5:51 left in the frame.

But WKU responded with a 13-2 run over the next three minutes, creating a 10-point lead after two free throws by Pettigrew.

Tigers guard Shawn Savage hit a three-pointer with three seconds left in the first half to cut WKU’s halftime lead to 36-29.

“There were some good moments and some times where we looked a little sluggish,” McDonald said. “I think that’s guys getting to know each other on the court at this level. We have so many new ones that it’s going to take some time.”

Things didn’t get much better for the Toppers for most of the second half, as a jumper by JaVaughn Espritt pulled Campbellsville within 59-53 at the 7:29 mark.

And then from out of nowhere, WKU exploded with senior forward Juan Pattillo leading the charge.

“I was a little nervous, and it took me a long time to get a rhythm,” Pattillo said. “It’s been a whole year, and at the half I was disappointed in my performance, so I just had to pick it up in the second half.”

While Pattillo kicked the door open for WKU, Pettigrew was the one that busted it down.

“It felt really good to come out here with a new group of guys and just play together,” Pettigrew said. “We’re going to learn from this game and work on the little things to get better.”

WKU shot 53.1 percent in the second and held Campbellsville to 33.9 percent shooting in the game. After getting outrebounded by one in the first half, the Toppers ended up winning the battle on the boards, 43-35.

“A lot of guys responded,” McDonald said. “Once they came out, they went back in and tried to do the right thing, so I was pleased with that.”

Ten players scored for WKU in the game, including five of the seven new players.

Senior forward Sergio Kerusch, who was left out of the starting lineup in lieu of freshman guard Brandon Peters, had 11 points and a game-high 11 rebounds.

WKU returns to the court at 7 p.m. Thursday for its second exhibition game against Xavier (La.).

McDonald said the team will take Monday off before trying to erase Sunday’s sluggish first half.

“We’ve got two more opportunities with practice to prove that you’re getting it — that you’re watching the tape, listening to coaches and trying to go out and develop some habits,” he said. “Those next two days are pretty important.”