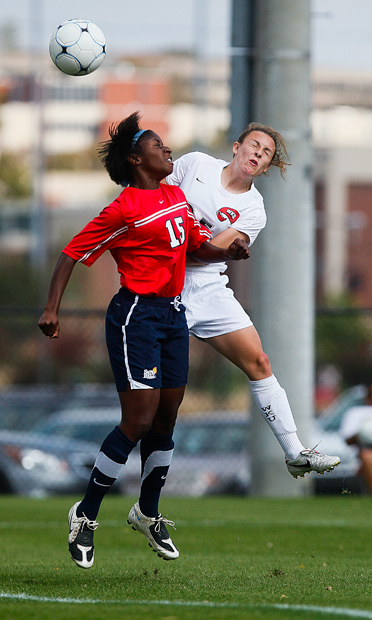 Sophomore midfielder Christen Sims battles South Alabama defender Landi Wilson for the ball during WKU's game on Sunday afternoon against the Jaguars. South Alabama scored two goals in the second half en route to a 2-0 win.

The WKU soccer team entered Sunday hoping to stay in the mix for the No. 2 seed in the Sun Belt Conference Tournament.

The best the Lady Toppers (8-7-2, 6-4 Sun Belt) can finish after a loss to the Sun Belt’s second-worst team is fourth.

“We’re in the conference tournament no matter what, so that’s a positive outlook on it,” Ott said. “Unfortunately, we no longer have the second seed that we would’ve liked to have had.”

Ott said WKU might’ve made things harder on itself for the postseason, but insisted the team will have to deal with the consequences.

“That means that we may have a little tougher road in conference, but everybody still has to play three games in four days,” she said.

Head Coach Jason Neidell said he didn’t see enough intensity in WKU’s performance and thought the team was careless with the ball.

“The team that played this weekend isn’t going to be able to do that,” Neidell said.

Not only did WKU lose on Senior Day, but the Lady Toppers also lost in front of a large showing of the university’s sports family.

“It was incredible,” Neidell said of the support. “It’s great to have them out here, and I wish we could’ve given them a better show today.”

All three of the Lady Toppers’ seniors — defenders Chelsea Grover, Maggie Wilder and Jamie Silverberg — started the match after combining to start 19 of 51 previous chances.

“It was really frustrating that we let two goals go in and we couldn’t convert on any of our chances,” Stout said. “It’s kind of about pride now because no matter what happens on Friday, doesn’t really change our standing or seeding.”

The Lady Toppers, who outshot USA 14-9 and held a 10-6 shots on goal advantage, play at Middle Tennessee on Friday to wrap up the regular season.

The Sun Belt tournament runs from Nov. 3-6 at the WKU Soccer Complex.