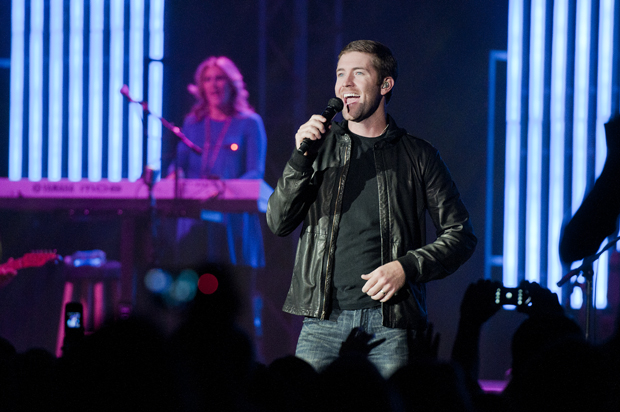 Josh Turner performs as part of the Campus Activities Board Thursday at the 2010 Homecoming Concert.

Burlington freshman Lauren Wentzel made a lime green poster for country music star Josh Turner that read “My little darlin’ is a firecracker,” a line from one of Turner’s songs.

She hoped that Turner would notice the sign when he performed in Diddle Arena tonight for the annual Homecoming Concert.

But Wentzel lost her fan sign among the crowd, where most were dressed in plaid shirts and cowboy boots.

Turner noticed her sign, but another girl was holding it up, prompting the country star to remark that the sign should say his little darling is a Hilltopper.

Wentzel was disappointed about the stolen sign, because she wanted Turner’s attention.

But she did get some attention from the country singer when she and a friend, Burlington freshman Rachel Holley met him backstage before the show.

“Our hearts stopped,” Holley said. “I was so excited I got to meet him.”

She said he asked them if they were looking forward to the show.

The crowd was lively, filling the stadium floor and most of the surrounding seats as they gathered to watch Turner perform.

Turner kept the crowd on their feet, cheering as he performed hits such as, “Why Don’t We Just Dance,” “Haywire,” “Would You Go With Me” and many more.

Tara Jordan, junior from Murfreesboro, Tenn., said she’s been a fan of Turner’s music for a long time.

“That deep voice will get ya every time,” she said. “He held my hand twice, it was amazing.”