Powell among five to join WKU Athletic Hall of Fame 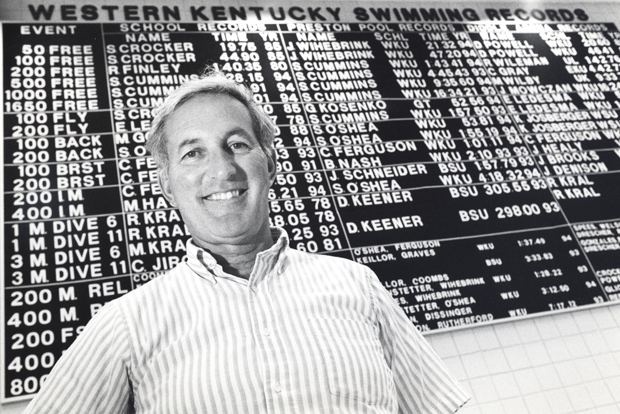 Former head swimming and diving coach Bill Powell had 35 consecutive winning seasons and 336 all-time wins while he was at WKU from 1969-2005.

Powell, the program’s founder, garnered a variety of recognition in his tenure, from ranking second in NCAA Division-I all-time wins as a head coach to the current natatorium in the Preston Center bearing his name.

Powell will add another acknowledgment with his induction into the WKU Hall of Fame this Homecoming weekend.

But it’s not only records and accomplishments that earned him a nomination for the Hall of Fame. Powell knows the true monument to his coaching career lies in his relationships with his swimmers.

“If you ask me to look at my 50 years of coaching and tell you all the kids that I didn’t like, I would be stumped,” Powell said. “I couldn’t find one.”

And with all the years spent coaching, Powell has had every opportunity to not like a kid.

“I had all kinds of kids,” he said. “I had screwballs and valedictorians, great leaders and losers, but I liked them all.

“I think that’s the thing that helped me most with success — that I liked the kids.”

But Powell’s relationships were never one-sided.

“He was always there for us,” said Tracy Phillips, a WKU swimmer from 1975-1979. “I was 800 miles from home, but I was treated like family. He had that fatherly relationship.

“He didn’t mind telling you what you were doing wrong, and he was always there with a kind word, too.”

A good number of swimming alumni are expected in Bowling Green for Powell’s initiation. As Powell put them in front of himself, they’ll do the same over Homecoming weekend.

“His induction, not mine, is going to be the highlight of my career at Western, because it’s so well deserved,” said Rick Kral, a WKU Athletic Hall of Fame diver.

And Powell, always tied to his swimmers, is sure to credit their efforts for his success.

“It’s the kids, when it comes down to that last relay and you’ve got to win it to win the meet,” he said. “The last kid is coming in even, and he’s afraid to take a breath for fear he’ll lose a tenth of a second and his legs feel like cement blocks and his arms feel like rubber bands and he guts it out and wins anyway.

“That’s not me. I’m just standing on the pool deck cheering for them. I always say the kids won the (336 meets).”

Powell may be unwilling to take credit for the program he has built at WKU, but his swimmers aren’t nearly as modest.

“He loved doing what he was doing, and when you love what you’re doing, you’re pretty damn good at it,” Kral said. “He’s got such charisma that people want to do well— not just for themselves, but for him.”