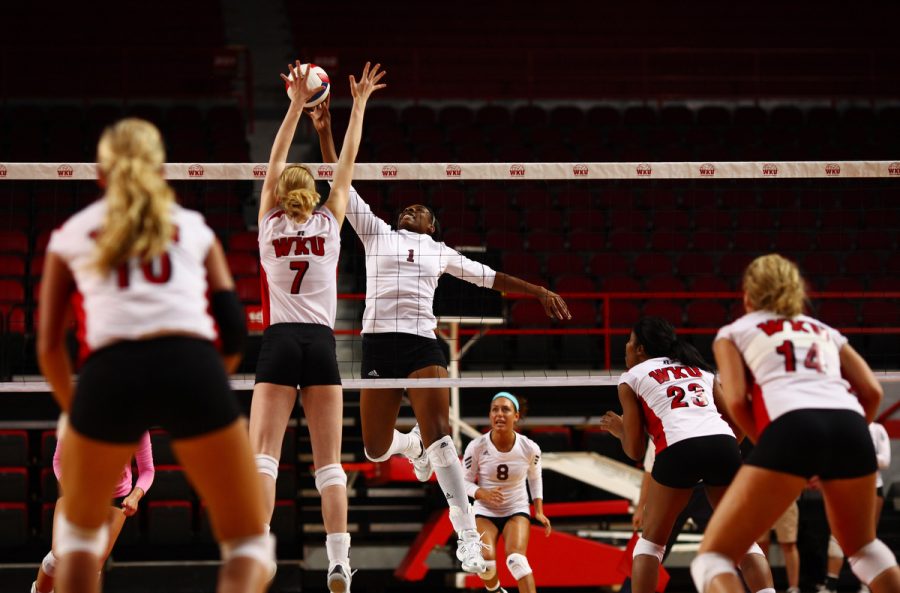 Junior middle hitter Tiffany Elmore jumps for a block at the net during the Lady Toppers' 3-0 win against Louisiana-Monroe at home in Diddle Arena Saturday, Oct. 23, 2010.

The coach, in his 16th season at WKU, said to treat the weekend like it was the first of the Sun Belt Conference Tournament.

It was advice that WKU (21-6, 10-1 Sun Belt Conference) took to heart, sweeping both Louisiana-Lafayette and Louisiana-Monroe in Diddle Arena — teams that the Lady Toppers may meet again on a larger stage.

“We are a team that is starting to reach potential,” Hudson said. “There are things that we have been capable of all along. With us, now having six matches left and still having our own destiny in our hands, we have to treat every match like it is important.”

Last weekend was one that Hudson said would most likely mirror the competition that WKU will meet in the first round of the Sun Belt tournament.

“With where we think we will be seeded, that first-round matchup is one where we will be more talented,” Hudson said. “The only time that matchup gets scary for you is if you don’t come out and play a full-focused effort. This was crucial for our kids going in as a favorite that we have to have great focus and no doubt in the matches.”

For now, WKU is second behind Middle Tennessee in Sun Belt standings, having a 10-1 record behind MTSU’s 11-1 record.

The close battle has boosted the importance of in-conference matches leading up to the Lady Toppers’ last regular-season contest before tournament time — a Nov. 12 match against MTSU in Diddle Arena.

Not only will the match fall on WKU’s Senior Night, but it could be the deciding factor in naming the Sun Belt’s regular-season title.

It will be a night that “will mean everything” to freshman defense specialist Ashley Potts, who is the younger sister of senior Kelly Potts.

“We want to win it not only for us, but for our seniors. Also I want to win it for my sister, Kelly,” she said. “If we win that game, then we are the regular season champs. I think we are putting everything together at the right time.”

“We will see these teams again there,” Wessell said. “Usually in the first round, whenever we first go to play, you have that shock that, ‘Wow, we are finally here. This is it.’ But once you get past that, you can focus on the actual tournament.”

Hudson said although he is having the team run through tournament scenarios early, he hopes that it won’t cause the Lady Toppers to lose any firing power for the real event. WKU still has five matches remaining on its schedule before the conference tournament.

Last season the Lady Toppers went 24-8 in regular-season play before losing to MTSU in the second round of the conference tournament. Hudson’s hoping for more this time around.

“We will find out soon,” Hudson said. “We just have to lace them up and do it all over again.”