Taggart not worried about pressure to make changes 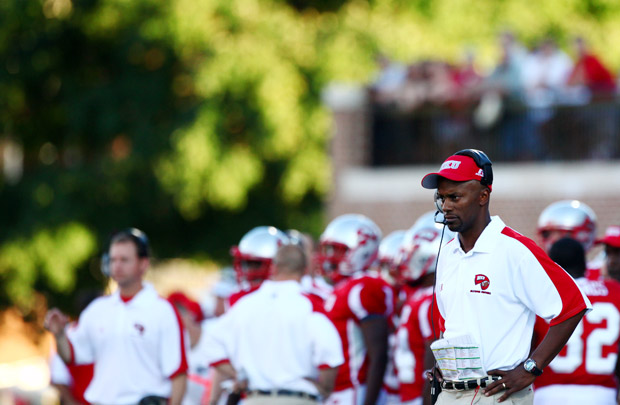 WKU head coach Willie Taggart looks on in frustration during the second half of Sept. 18's home-opening against the Hoosiers. The Toppers fell to the Hoosiers 38-21.

But what if it’s broken?

Head Coach Willie Taggart is facing that exact dilemma as he tries to pick up the pieces of WKU’s football program.

The problem is, despite outside pressure to make changes, Taggart said he’s not ready to do much tinkering to the master plan.

“If you’re a true Hilltopper, and you truly care about this football team, you won’t stray away,” Taggart said. “You’ll understand where we’re at with our football team, and you’ll stick behind our kids. We’re all going to get out of this together.”

Taggart said he knows that losing has been tough on fans. He said it’s even been hard for him to deal with, because frankly, he didn’t do much losing as a WKU player.

“I understand how everyone feels,” Taggart said. “I feel that way. It’s odd for me being in Bowling Green when everyone feels this way.”

Last Saturday’s 35-30 loss to Louisiana-Monroe at home only fueled the fire. Taggart said he knows some fans may want him to make drastic changes on the field, but that’s not going to happen.

“I don’t go to anyone else’s job and tell them how to do things, so let me do this, and let me lead.”

But Cooper said that’s something the team eventually just has to drown out.

“Every time something happens or something’s said, we see it in the papers, and we see it on the news,” he said. “But it doesn’t matter what happens outside these white lines and outside that locker room.”

Sophomore defensive end Quanterus Smith said that just because the Toppers are tuning out their critics doesn’t mean they aren’t evaluating themselves.

Smith said the entire defense met on Sunday to discuss what caused WKU to blow a 17-point lead in the fourth quarter against ULM.

“We all got together and said that we’re not going to allow that to happen again,” Smith said.

And WKU will need a better resolve if it wants to pull an upset at Louisiana-Lafayette Saturday.

Taggart said the Toppers will have to tighten up if they want to get over the Monroe loss in time to be competitive this Saturday.

But as far as making a massive overhaul goes, Taggart said that’s not the way to go.

“After this, nothing too bad can go on,” he said. “We’ve just got to get King Kong off our backs. It’s not Curious George — it’s King Kong. Once we get him off our back, we’ll be all right.”