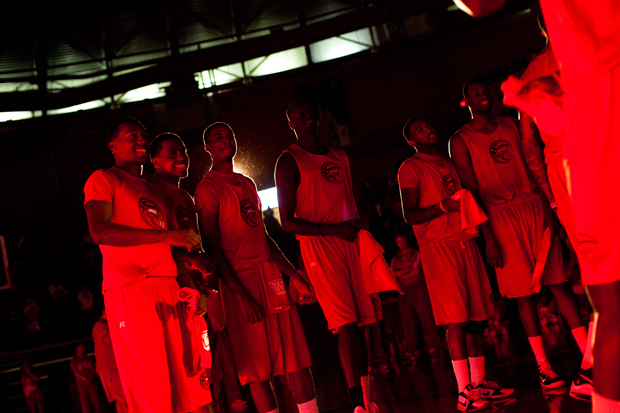 The WKU men's basketball team gathers at center court in Diddle Arena Oct. 16 while being introduced to fans.

Head Coach Ken McDonald woke up at 3:30 a.m. on Friday, the day of WKU’s Hilltopper Hysteria.

Part of the early wake-up call was excitement for Hysteria festivities. Part of it was eagerness to kick off boot camp.

“Boot camp” is the term McDonald has applied to the Toppers’ early practice sessions, which began Saturday morning.

McDonald said WKU will have two practices a day for at least the first 10 days.

“We’re going to be up early and show some commitment to what we’ve got going on and how important this preseason is,” McDonald said Saturday. “I want the guys to be committed and show that sacrifice, and they’ve been great so far.”

The intense preseason will likely be a culture shock for WKU’s seven newcomers, but freshman guard Brandon Peters said he knew what he signed up for when he committed.

“I knew it was going to be hard. It’s college,” Peters said. “It’s the next level, so I pretty much expected it. Every day is more aggressive, and everybody’s fighting for positions.”

Senior forward       Steffphon Pettigrew said the early workouts are the hardest he remembers in his time at WKU, but that’s not necessarily a bad thing.

“With a bunch of new guys like we have this year, it’s very important to try to find that togetherness right now,” Pettigrew said. “But it’s only day two. We’ve got a lot more days to go, so we’re going to keep building and building.”

The Toppers squeezed in two hour-long practice sessions on Friday before Hysteria, but they still had enough left in the tank to dazzle the crowd that night with a dunk-filled scrimmage.

That’s the kind of stamina McDonald said he wants to see from a team that will rely on athleticism and speed.

“Looking at our schedule, there’s no easy nights out there,” he said. “We’ve got to do something to set ourselves apart. We want to have that toughness that’s the trademark of a WKU basketball team.”

Peters said the guidance of the veterans has made it easier to build that toughness. He said the team eats together, hangs out together and does everything it can to build chemistry.

“In the beginning, they talked to us and let us know what to expect,” Peters said. “They still talk to us, and they’re still trying to prepare us.”

McDonald said he was worried at one point that the seniors — Sergio Kerusch, Juan Pattillo, Cliff Dixon and Pettigrew —  wouldn’t provide that kind of leadership.

He said most of them lead by example, although he’s starting to see and hear them become more vocal.

“I think the best illustration to deal with guys that are older is, remember in your shoes what it was like,” McDonald said. “Remember when you were on your visit. You wanted to get to know people, and you wanted help. There’s nothing wrong with lending yourself.”

And if that’s what it takes to win, Pettigrew said he’s ready.