Toppers tired of same results after loss at FIU 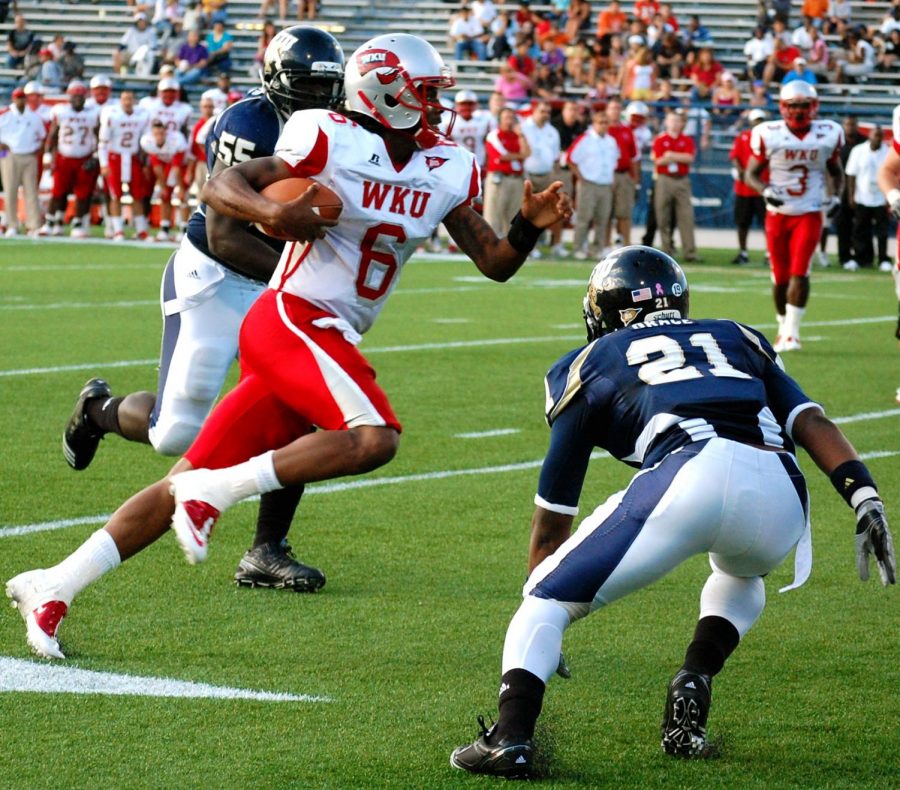 Sophomore quarterback Kawaun Jakes threw for 193 yards and two touchdowns on 14-of-31 passing Saturday in WKU's 28-21 loss at FIU.

It was freshman receiver Willie McNeal who failed to make a game-tying touchdown catch with 33 seconds left in WKU’s 28-21 loss at Florida International last Saturday.

But when the Toppers (0-5, 0-1 Sun Belt Conference) left the field in Miami, they said they felt the win had slipped through all of their fingers.

“This one really hurts,” senior linebacker Chris Bullard said. “We really battled in the second half and gave ourselves a chance, but we have to be more consistent and play smart and execute for all four quarters.”

The game was within WKU’s grasp on numerous occasions. After falling behind 21-0 in the second quarter, the Toppers eventually pulled within 21-14 in the third quarter and were driving with the ball.

Then, with the poorest of timing, sophomore quarterback Kawaun Jakes fumbled after an 11-yard scramble.

The Golden Panthers recovered the ball, and FIU quarterback Wesley Carroll strolled into the end zone for a one-yard touchdown six plays later.

It was a miscue Head Coach Willie Taggart said could have been overcome had WKU not dug itself such a massive hole early in the game.

“I don’t think any of these guys are going to quit,” Taggart said. “But our guys have to understand they need to put themselves in a situation where we’re not talking about quitting. Come out on fire, and get up on people, so we don’t have to be in that position.”

Despite the ill-timed turnover, the Toppers got another opportunity with 3:07 left in the game. Jakes first connected with sophomore receiver Dexter Haynes for a 53-yard touchdown, and a quick defensive stop put WKU’s fate in the hands of its offense.

But the Toppers stalled after moving 12 yards downfield. Jakes’ last heave on fourth down was aimed at an open McNeal, but the ball ricocheted off the freshman’s hands in the end zone.

WKU came that close to overtime, but junior running back Bobby Rainey said close isn’t going to cut it any longer.

“We aren’t about moral victories anymore,” Rainey said. “Someone said last year if we fell behind 21-0, we wouldn’t have come close to winning like we did today, but it’s not about last year. It’s about this year.”

The Toppers have their sights set on a Sun Belt championship, and Taggart said one league loss isn’t going to derail that vision.

He predicted after the game that no team would finish undefeated in the Sun Belt. Only Troy and FIU remain unbeaten in league play as of Sunday.

But as far as Rainey is concerned, WKU has been beating itself for far too long.

Every conference loss moves the Toppers further away from their championship goal.

Rainey said he’ll use just one measuring stick for the team’s success from this point forward.

“The bottom line every game is, ‘Did we win or lose?’” Rainey said. “Our goal isn’t to come close. It’s to win. That will continue to be the focus, because that’s the way it should be.”