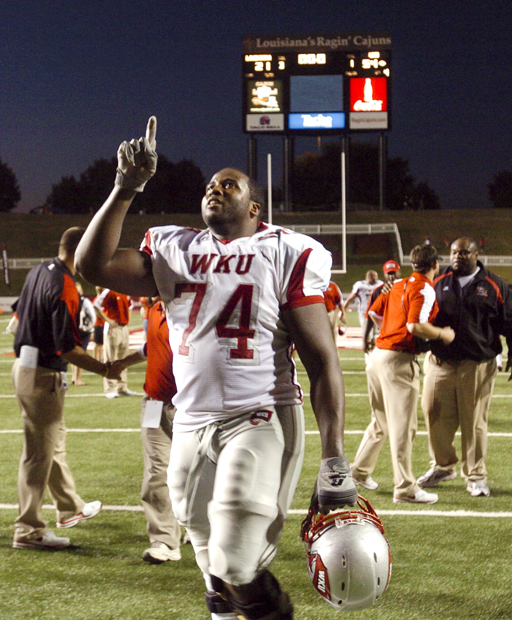 One sample of winning is all it took to turn the WKU football team into a bunch of addicts.

And that’s a feeling Patterson said he can get used to.

“We got that first little taste of a win, and it’s pretty addicting,” he said. “So I think we’re going to keep on moving.”

It’s also Homecoming weekend for WKU, and Head Coach Willie Taggart said the team has a responsibility to give the home crowd that same taste of victory.

Taggart’s the first to admit that the Mean Green (1-6, 1-3 Sun Belt) have the Toppers’ number.

The Mean Green edged WKU, 27-26, in 2007, but the last two meetings have been shoot outs. The Toppers averaged 44.5 points of offense in those two games but surrendered an average of 59.5 points per game.

“They’re a really good team,” sophomore defensive tackle Jamarcus Allen said. “They’re a very physical team. The offensive line is good, and they have solid running backs and wideouts, so this is going to be one of the best games at home.”

“They have nothing to lose,” Allen said. “They’re going through what we went through last year, so they’re going to come out with something. They’re in the lowest of the lows right now, so I would expect them to try to have their best game.”

Even though North Texas is reeling right now, Taggart said it’s important to remember that WKU has the same record this season as the Mean Green.

Taggart emphasized that dealing with success is as important as dealing with failure, and the Toppers have to keep last week’s victory in perspective.

“All we’ve done is win one ballgame,” he said. “That’s not good enough. We’ve got to do more.”

And the Toppers are craving more.

Sophomore defensive end Quanterus Smith said the streak-snapping win last Saturday night was sweet, but he woke up the next morning wanting another taste.

“It felt good that we won, but on Sunday, I wanted another one,” Smith said. “It feels good to have the monkey off your back, but one’s not near enough.”