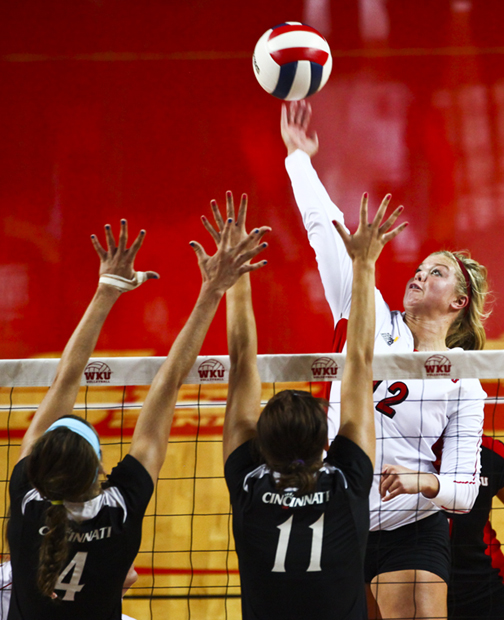 WKU volleyball coach Travis Hudson has tabbed it the "clash of the titans." The Lady Toppers host WKU on Friday night with the Sun Belt Conference's regular-season title on the line.

Sophomore outside hitter Jordyn Skinner believes in the simple things, like the fact that hard work pays off.

She said it was hard work that allowed her to lead the Lady Toppers (19-6, 8-1 Sun Belt Conference) in her freshman season and overcome a shaky start to her sophomore season.

After limited playing time in the first games due to an ankle injury, the Grand Rapids, Mich., native has come back as one of the top offensive players for WKU.

“It kind of sucked in the beginning, but crap happens, and you have to get over it,” Skinner said. “I have just been constantly working hard. Also, having confidence and knowing I can do it helps.”

Skinner has totaled 201 kills and is averaging 2.42 kills per set so far this season.

But she’s successful on the defensive side also, having earned 246 digs and 37 blocks.

Because of Skinner’s performances in the last two weeks, Head Coach Travis Hudson said it’s clear the sophomore has regained the confidence she may have lost after her injury.

“Jordyn comes and goes as her confidence level comes and goes,” Hudson said. “She went through a stretch where that dipped a little bit. But now she knows she can, and she is feeling good about herself, and you can see that.”

Hudson said he noticed Skinner’s talent early in her freshman year, when she was one of only four Lady Toppers to participate in all 126 sets of the season. Skinner led the team with 304 kills.

Skinner said simply having another year under her belt has helped with this steady progression.

“It is just getting used to everything and getting more comfortable with how we play and how things work here,” Skinner said. “As the years go by, hopefully things will just continue getting better.”

Senior outside hitter Emily Teegarden said Skinner hasn’t had to do any maturing in the last two years.

“She never really was a freshman to us,” Teegarden said. “She came out and did her job for us, but she also did so much for our team. Now, she is out there with the best of them and she really is our most valuable player.”

The title of “most valuable player” is one that Hudson uses regularly when discussing Skinner.

“She is such an unsung player,” Hudson said. “She does so many things for our team. She is clearly our most valuable player when you talk about the true essence of what that means, because she can do everything.”

With Skinner only a sophomore in the thick of a challenging schedule, Hudson has no doubt that she’ll continue to keep getting better.

“She just continues to progress,” Hudson said. “Her confidence level has increased as the year has gone on and that has allowed me to put someone really special on the court.”