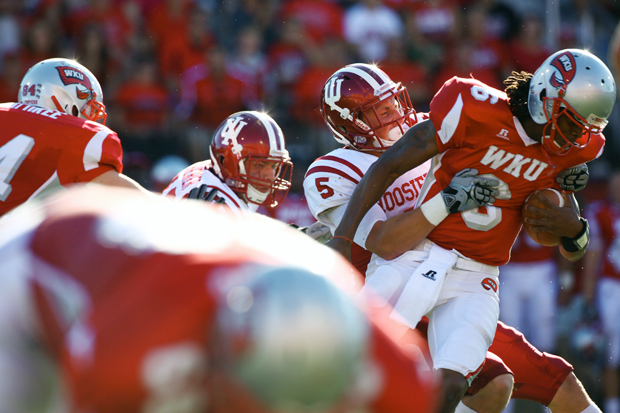 WKU quarterback Kawaun Jakes is wrested to the ground on Saturday by Indiana safety Mitchell Evans during the first quarter of the Toppers' 38-21 loss.

WKU has had a different quarterback to start each of the last five seasons, all the way from Justin Haddix in 2006 to current sophomore Kawaun Jakes.

“We’re not building a circus around here, and he is our quarterback,” Taggart said of Jakes. “He had a bad first half, but again, he wasn’t the only one having a bad first half.”

Jakes threw for 193 yards and two touchdowns at FIU, but he completed just 14 of 31 passes. He also had a crucial fumble in the third quarter with WKU down just one score.

“I kind of took a lot of that on me,” Jakes said. “I missed a lot of easy throws. At critical points in the game, the offense didn’t play to its potential.”

Taggart was critical of Jakes after the game, but he said he realized after watching film that not every missed opportunity fell on him.

“On some of those balls that looked like they were overthrown, receivers just stopped running,” he said.

“I think we just need to get a little extra work in,” Cooper said. “We threw the ball more than we usually do on Saturday, and we really just weren’t prepared.”

If the first five games are any indication, Jakes will continue to throw the ball more often. He’s averaged 25 passing attempts per game this season and 34 per game in the last two contests.

But that’s not necessarily what Taggart wants.

“I just thought in the first half, he was playing like a robot,” Taggart said. “He was out there pushing the ball instead of playing instinctively.”

Jakes said part of playing with instincts means getting back to the running game.

He racked up 355 rushing yards and five touchdowns on 125 carries as a redshirt freshman last season, but he’s gained just 61 yards on 34 carries this year.

“Coach told me I needed to run more, and a couple players said the same thing, so I think I need to break out of the habit of just throwing the ball,” Jakes said. “I think when I run, it does help. If someone’s not open, we can still move the chains.”

Taggart said he’s confident that Jakes is capable of sustaining drives, and that’s why he’s not ready to make a hasty switch at the position.

It’s the second time Taggart’s backed Jakes, having first chosen him as the starter after Jakes missed spring practices with a basketball-related ankle injury.

And with the short average lifespan of starting quarterbacks at WKU, Jakes said he doesn’t take that loyalty for granted.

“It shows a lot in him,” Jakes said. “For him to have faith in me — I’m privileged to have him on my side. I feel thankful.”