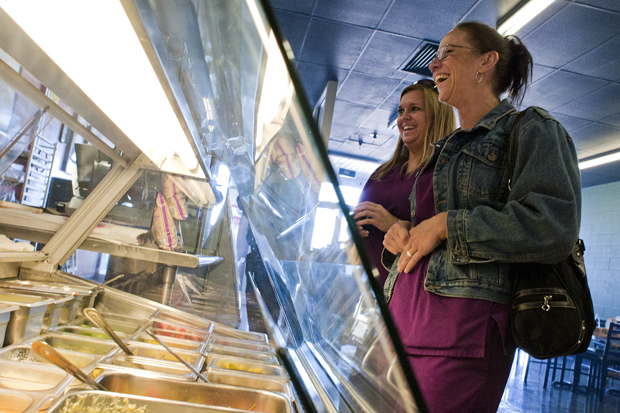 From right, Michelle Hale and Tammy Cowles, both of Bowling Green, laugh with Tony Noghlabadi as they order their lunch from him at Geno's Italian Deli on Wednesday. Noghlabadi and his wife Valeria both own and operate the restaurant serving salads, sandwiches, soups, pastas, and gyros. CHRIS FRYER/HERALD

Tony Noghlabadi said he opened Geno’s Italian Deli in September to provide a different kind of sandwich presented in a “soothing” atmosphere.

He said the staff also tries to create a refuge for customers from the loud music and “screaming” TVs that other places have.

Noghlabadi said he likes to play classic songs from the 1940s and 1950s over the speakers to help soften the restaurant’s atmosphere.

Noghlabadi said he decided to open this restaurant because he wanted something that’s smaller than what he was used to.

He said that he used to own a few larger restaurants in Bowling Green, such as buffets, a couple of years ago.

She said she enjoys coming up with new ideas to help promote Geno’s and searching for local musicians to perform there on Saturday nights.

She said she has many other ideas to bring in future performers.

“I would like to get a jazz band from Western,” Jessica said.

The restaurant offers foods such as custom-made sandwiches, salads, soups, pasta and coffee, as well as an assortment of desserts that change from day to day, Tony said.

One of their signature desserts is the Tulip Muffin, a muffin wrapped in a paper cup resembling the flower, he said.

Tony said the restaurant currently has pumpkin spice Tulip Muffins on hand for the fall season.

Geno’s also offers gyro sandwiches, which differs from the Italian theme, but is one of the restaurant’s most popular sandwiches, Morrel said.

Some of the restaurant’s unique items include mortadella, a meat that is like an Italian bologna and a spicy capicola ham, Morrel said.

He said both items are imported.

Sandwich prices at the business range from about $5 to $8.

Jessica said they recently started a Happy Hour at the restaurant.

Jessica said she came up with the idea because she was trying to think of a way to bring more people in between the hours of two and five.

All smoothies and lattes are $2, Jessica said.

Jessica Noghlabadi said they added this special to attract families.

Morrel said that families have been responsive to the deal.

“Lots of families come in after picking their kids up from school,” he said. “They like to take advantage of the specials and the different taste.”

“We almost consistently have a line out the door,” he said.

The restaurant also offers takeout, catering and has an outdoor patio at the front of the restaurant.

“We want to make people happy and have them leave happy,” Tony aid.

Geno’s is located at 1751 Scottsville Road in the Ashley Center Suite 4.

Restaurant hours are Monday through Saturday 10 a.m. to 8 p.m.