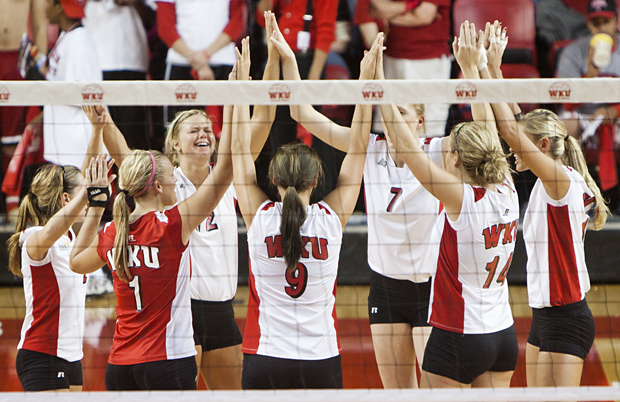 Only one Sun Belt Conference volleyball coach predicted in the preseason the Lady Toppers could win it all.

That coach was the Lady Toppers’ own, Travis Hudson.

“If you look back at the preseason ballot, Western Kentucky had one vote for regular-season champions,” Hudson said. “It was me, and I made no bones about it. I thought we had a team that could compete for a championship, and certainly we are playing at that level right now.”

Even though the Lady Toppers have not dropped a set during their current seven-match winning streak, Hudson wants the doubters to keep doubting.

“Flying under the radar puts me in my comfort zone,” Hudson said. “You have to remember — 16 years ago, I started with a team that won seven matches. I relish the underdog role. We are just not in it very often.”

But keeping the underdog status is becoming increasingly difficult, as WKU received national recognition last week with the release of the American Volleyball Coaches Association Top 25 poll and the RickKern.com PKPI poll.

WKU has won nine of its last 10 road games and has won six of its last seven in Diddle Arena.

“This is going to raise some eyebrows,” Hudson said. “We have played really, really well. I’ve had a belief in this team. When we started 0-2 this year, I said, ‘I think we can play.’ We are continuing to get better.”

Hudson said each player on this season’s team has the potential to make the big plays for WKU, such as last weekend’s offensive and defensive leaders, junior middle hitter Lindsay Williams and sophomore libero Sarah Rogers.

“It’s funny because no one in our league seems to believe in us,” Williams said. “We are on a mission to prove them wrong.”

The Lady Toppers sit atop the Sun Belt standings in a tie with Middle Tennessee State, who they will face on Wednesday in Murfreesboro, Tenn.

“I think we are the ones to beat,” Rogers said. “Going into that Middle Tennessee match, if we can beat them, it will be smooth sailing.”

When Hudson, however, was asked if the Lady Toppers were the ones to beat, he flashed a smile and simply said, “Nope.”

“Every other team in this league is the one to beat, and we are the team that is going to try to beat them,” Hudson said.