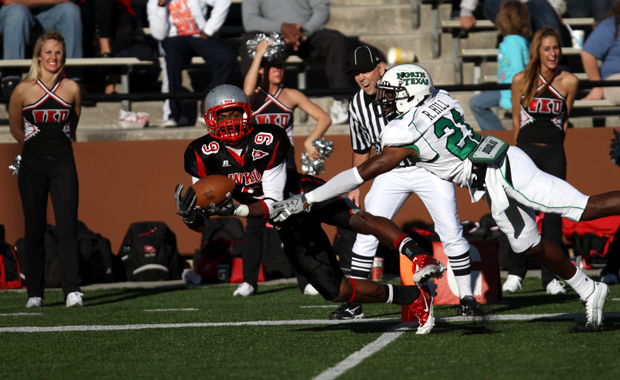 Wide receiver Marcus Vasquez, here diving for a catch last season against North Texas, is the only actice receiver returning to the team to have caught double double digit passes last season.

“The receivers didn’t play well at all,” Taggart said. “They hurt us.”

Sophomore quarterback Kawaun Jakes completed 15 passes for 116 yards in the game, but 57 of those yards were to junior running back Bobby Rainey on five receptions.

Taggart, who didn’t allow players to speak after the game, said the receivers were simply running the wrong routes.

In the past, Taggart tagged some of the blame for WKU’s offensive woes on Jakes. But Saturday, he said that simply wasn’t the case.

“I’m sure there’s other guys that made mistakes, and we’ll see those guys when we watch the film. But those receivers hurt us.”

After junior kicker Casey Tinius missed a 41-yard field goal in the first quarter Saturday — dropping him to 4-of-10 on field goals this season — Taggart said he reached his breaking point.

He elected to use redshirt freshman kicker Monte Merrick on a 37-yard try in the second quarter, which Merrick made.

Merrick also made a 46-yard field goal in the fourth quarter, which impressed Taggart.

“I’m always happy when a guy steps up and makes a play, no matter who it is,” he said. “That’s what it’s about, and that’s what I want our football team to be about.

“There’s always going to be competition and the chance to take someone’s job. I’ve said that from day one.”

Although WKU broke its 26-game losing streak and Homecoming was in full swing on campus, the crowd at Houchens-Smith Stadium didn’t reflect that Saturday.

The game’s attendance was announced as 14,373, the lowest of the season.

Taggart said he thought the conditions surrounding the game might boost those numbers, but at the end of the day, it’s not something he worries about.

“You expect it, but I’m sure a lot of people were over tailgating,” he said. “I was happy. I’m always happy with the ones that are in there. Those are the ones that care about this football team and want us to be successful. I just want our team to play well for them.”