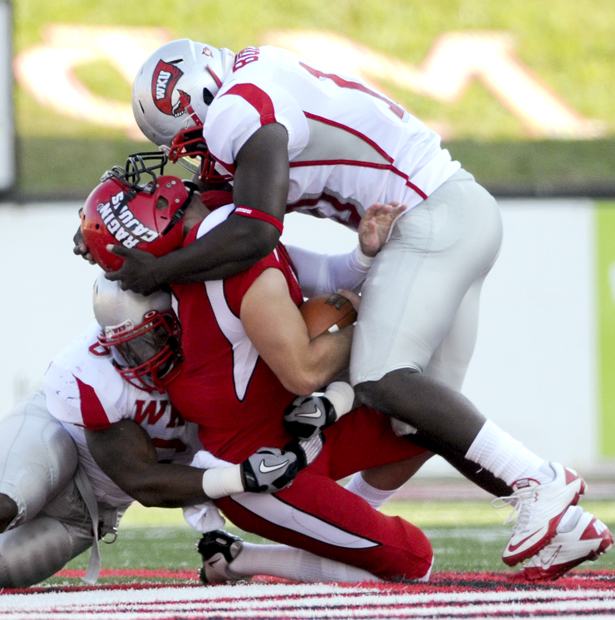 Keep up with the Toppers’ seventh opportunity to break the streak this season when WKU and Louisiana-Lafayette kick off at 4 p.m. CT at Cajun Field. ULL has won all three meetings between the Toppers and Ragin’ Cajuns.

ULL’s Brad McGuire gets a 1-yard touchdown run with less than two minutes left, but that hardly matters at this point.

WKU will run this clock out, and the Toppers will get the weight of the world off their shoulders with their first win in 27 tries.

Sure, why not? Running back Antonio Andrews runs for a 30-yard touchdown — the second of his career and his second of the day — to give WKU a 40-point lead. Really.

I understand this one has spiraled out of control, but WKU has been dominant.

This has just gotten silly. Junior cornerback Derrius Brooks intercepts Chris Masson and returns it 62 yards for a touchdown, and WKU is piling it on now.

OK folks, time to get excited.

Kawaun Jakes finds tight end Demetrius Coley for a 43-yard touchdown, and WKU has this game firmly in hand.

Coley has come out of nowhere, catching two balls for 74 yards. That score is also his first touchdown.

We’ll obviously have a whole lot of coverage of this game — and what should be a win — later tonight. Lots of stories and things to talk about.

The Toppers go 70 yards and get Kawaun Jakes’ second 1-yard rushing touchdown of the day, set up by a 31-yard reception by freshman tight end Demetrius Coley.

Casey Tinius missed the extra point, but WKU has a solid lead now.

WKU faced 1st and 25 at its own 15-yard line at the beginning of that drive, but the Toppers got a big pass interference call and a 23-yard run by Bobby Rainey.

ULL isn’t ready to go away so easily.

The big play of the drive was a 42-yard catch by receiver Vernon Wolfe.

WKU has been in this situation plenty of times during the losing streak, and it has always folded. We’ll see now if today’s going to be any different.

WKU gets another chance to score with less than a minute left in the half, and Casey Tinius converts a 47-yard field goal attempt as time expires with a strong wind behind him.

ULL decided to go for it on 4th and 6 on the previous drive but came up short.

Kawaun Jakes then got Tinius into field-goal range with a 20-yard pass to Willie McNeal.

Jakes is 14-of-17 for 168 yards, a vast improvement over his shaky performances in the last few weeks.

Marcus Vasquez already has seven catches for 69 yards, and McNeal has 88 yards on five receptions.

WKU outgained the Ragin’ Cajuns 230-162. The Toppers held the ball for 21-of-30 minutes in the first half and also converted 6-of-8 third downs.

But then again, everyone remembers how last week went. It’s fair to say that no lead is safe, and I’m sure Taggart is urging his team right now in the locker room to not let another one slip away.

The Ragin’ Cajuns botch a punt, giving WKU the ball on the ULL 24-yard line, and running back Antonio Andrews capitalizes with a 4-yard touchdown run.

That was Andrews’ first career touchdown. The score was set up by a 20-yard pass from Kawaun Jakes to Willie McNeal.

We’ll analyze this a little bit at halftime, but WKU has looked stellar so far.

Quarterback Kawaun Jakes capped a 15-play drive with a 1-yard score on a QB sneak, and the Toppers are back up 10.

The score doesn’t necessarily show it, but WKU has completely controlled this game. The Toppers have held the ball for over 20 minutes in this half, while ULL has only had the ball for 6:50.

ULL quickly answers with a 52-yard touchdown strike from quarterback Chris Masson to Aaron Spikes. That drive only took three plays, which is exactly what WKU doesn’t want.

The Toppers finally get a break.

Sophomore defensive tackle Jamarcus Allen returned a fumble by ULL quarterback Chris Masson 69 yards for a touchdown, and WKU has a two-score lead.

That’s exactly the kind of pivotal turnover the Toppers haven’t had all year. Let’s see if they can protect the lead this week.

WKU dominated the clock in the first quarter, holding the ball for over 11 minutes.

The Toppers got a three-and-out on ULL’s first drive of the game, but the Ragin’ Cajuns will be driving with the ball when the second quarter begins.

The Toppers score first with a 20-yard field goal by Casey Tinius, but they surely would have liked to get more on that drive.

Junior running back Bobby Rainey actually punched the ball in on a 6-yard run, but the score was called back with an illegal shift penalty.

The field goal makes Tinius 3-of-8 on the year.

Quarterback Kawaun Jakes had two big completions on third down on the drive, finding Marcus Vasquez for a 25-yard gain and Willie McNeal for 19 yards.

WKU moved 48 yards downfield on 10 plays in the first drive of the game, but Tinius missed a 42-yard field goal try into a stiff wind. It’s starting to get to the point where the Toppers have to decide if they want to keep sending Tinius out for field goals of 35 yards or longer.