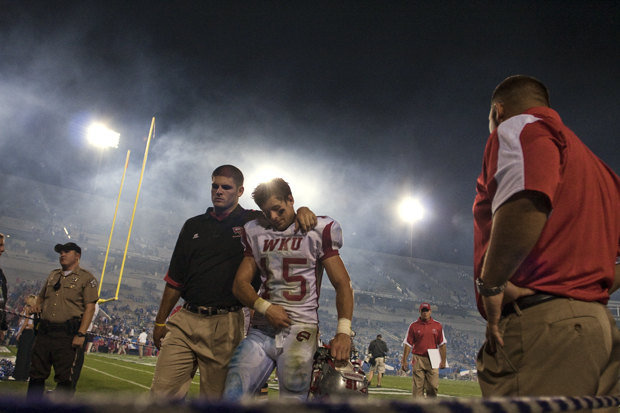 Junior defensive back Ryan Beard is consoled after the Toppers fell to the Wildcats 63-28 on Saturday at Commonwealth Stadium in Lexington.

It just turned out that Kentucky had a lot more bullets.

The Wildcats (2-0) outscored WKU by 42 after Rainey opened the game with a 59-yard touchdown run, blasting the Toppers 63-28 at Commonwealth Stadium.

“I think we just hurt ourselves,” Head Coach Willie Taggart said. “We got penalties, and penalties get us off-schedule. And then turnovers where they get the ball in great field position.

“It’s hard to play football that way, especially against an SEC football team. We can’t do that, and it was penalties after penalties at one point in the second quarter. We’re not good enough yet in order to do that.”

Kentucky senior quarterback Mike Hartline answered Rainey’s burst with a 2-yard touchdown strike to receiver Chris Matthews with 8:02 left in the first, and before WKU (0-2) could get its bearings, the Wildcats broke the game open.

Kentucky rattled off four straight scores — only one lasting more than 51 seconds — to push out to a 35-7 lead with 1:34 left in the first half.

“I just thought the effort was there, but we need to tackle better and have everybody get to the ball,” said senior linebacker Chris Bullard, who led WKU with eight tackles. “I feel like we’ll be a lot better football team if we get more turnovers. Defensively, it’s our job to get the ball too, and we can’t always rely on the offense to keep security on the ball.”

The Wildcats got a 10-yard touchdown run from Hartline, a 50-yard punt return from junior Randall Cobb and a 1-yard score by senior running back Derrick Locke without an answer from WKU. Cobb then hooked up with fullback Moncell Allen out of the Wildcat offense for a 15-yard touchdown pass.

“One of the things we talked about was showing the maturity of this football team,” Kentucky Head Coach Joker Phillips said. “We wanted to come out, play fast, play smart, play physical and play inspired football in the first half. I thought we did that.”

They also racked up several offensive penalties and an interception by sophomore quarterback Kawaun Jakes that gave the Wildcats the ball deep in WKU territory. The team finished the game with seven penalties for 50 yards.

Taggart suggested that the Toppers might have gotten too amped up after taking an early 7-0 lead, losing some of their mental toughness.

Things could’ve gotten much worse for WKU had freshman receiver Willie McNeal not returned a Kentucky kickoff 90 yards for a touchdown with 1:15 remaining in the first half to pull the Toppers within 35-14. The play was WKU’s first kickoff return touchdown in 73 games.

The Wildcats still found a way to answer, however, as Hartline found receiver La’Rod King for a 4-yard score to put Kentucky up 42-14 heading into halftime.

Kentucky kicker Ryan Tydlacka missed a 35-yard field goal to start the second half, and the Toppers capitalized with Rainey’s second touchdown of the game, a 1-yard run up the middle that capped an 80-yard drive with 5:31 left in the third quarter.

Rainey finished with a career-high 184 yards on 22 carries. He’s the first WKU running back to rush for 150 yards in two consecutive games since Rod Smart did it in 1999.

After carrying the ball 30 times last week at Nebraska — a workload Taggart said was too high — Rainey said his 8.4 yards per carry Saturday still weren’t enough.

“I feel fine,” Rainey said. “I just need to do more with those carries that I have — it doesn’t matter how many it is.”

Hartline continued to have his way with the Toppers’ defense late in the third quarter, finding a wide-open Cobb for a 35-yard touchdown pass with 3:02 on the clock, giving Kentucky a 49-21 advantage.

While Cobb and Locke provided the big plays for the Wildcats, Hartline quietly added a strong effort. The senior completed 16-of-20 passes, throwing for 213 yards and three touchdowns.

WKU scored its final touchdown when sophomore receiver Marcus Vasquez reeled in a 34-yard pass from Jakes with 8:32 left in the game.

Jakes finished 8-of-15 passing for 97 yards, with one interception.

Kentucky running back Raymond Sanders scampered his way to touchdown runs of 10 yards and 1 yard late to end the scoring.

Although Taggart wouldn’t comment on WKU injuries during his postgame press conference, a handful of Toppers obviously sustained some kind of injury Saturday night.

Junior tight end Tristan Jones came off the field favoring his left ankle early in the game and was later seen being carted off the field with crutches. Sophomore safety Kareem Peterson was also in an arm sling, and junior defensive end Jared Clendenin was seen after the game with a boot on his right foot.