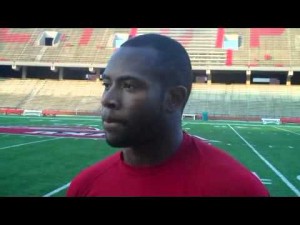 Willie Taggart was complimentary of WKU’s true freshmen defensive backs last weekend, but the head coach said Thursday that some younger players on offense are starting to make their mark.

Taggart said both freshman running back Antonio Andrews and freshman receiver Donald Campbell will make the trip to South Florida this weekend after an impressive week of practice.

“Antonio Andrews had a good week of practice, both on scout team and offense,” Taggart said. “He’s our (South Florida quarterback) B.J. Daniels and gave a pretty good look too.”

“He’s helped our team out a lot,” Majors said. “He’s contributing, and I think him being out there and giving us a look has given him a chance to get out there on game days. He’s showing the coaches what he can do.”

Campbell debuted at Indiana with a 46-yard kickoff return, and Taggart said the 5-7 receiver is starting to get more comfortable with the offense.

“Now he’s taken a hit, and he held onto the football,” Taggart said. “Usually, that’s what you’re afraid of when you put a young guy out there carrying the ball. Can he take a lick from the big guys? He’s shown that, and it’s build the kid’s confidence up. He’s talking more.”

Taggart said a lot of the Toppers’ younger offensive players would have played earlier in the season, but falling behind in games caused him to stick to more proven playmakers.

“Once we get in that ideal game that we feel like we should be in, I think you’ll see a lot of other guys get in there and help us out,” Taggart said.

Running of the Bulls

WKU got all it could handle from Nebraska’s Martinez in its season opener, but Taggart said he thinks South Florida’s Daniels is even faster and more athletic.

“He’s the real deal,” Taggart said. “I call him ‘Little Michael Vick.’ I remember watching him in high school, and he was that good in high school. The kid was a heck of a basketball player too, and he plays football like he’s a point guard.

“He’ll cross you over with the football, and he’ll take it to the hole — the endzone.”

Daniels has thrown for 348 yards and three touchdowns so far this season and rushed for 130 yards and a score.

He had 23 yards and a touchdown against WKU last season when South Florida quarterback Matt Grothe went out injured.

“When your defense goes against a mobile quarterback, it’s going to be a bigger challenge,” Majors said. “We’ve just got to focus in and get stops.”

While increased playing time for the young defensive backs has helped the freshmen come along quickly, Taggart said the competition has motivated the veterans this week.

Getting stops on third downs has been a big focus this week after WKU allowed Indiana to convert 10-of-13 third downs last weekend, with Taggart going as far as to outline the first down mark with a big, yellow line on the practice field.

Taggart said he wants the Toppers to be aware of down and distance, but making plays is the quickest way to get the defense off the field.

Taggart said the status of junior safeties Ryan Beard and Mark Santoro and offensive lineman Mycal Patterson are “up in the air” heading into Saturday’s game.

Beard is dealing with a deep thigh bruise, while Santoro and Patterson are both working through nagging neck injuries, according to Taggart.