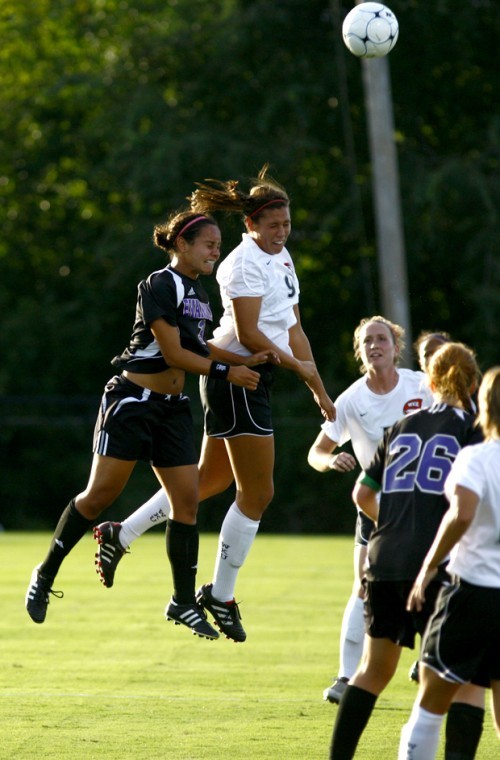 WKU sophomore Sydney Sisler rises above Evansville sophmore Evansville Olivia Robinson to head bump the ball during the first half of their game on Friday at the WKU Soccer Complex. The Lady Toppers won 4-0.

The WKU women’s soccer team on Friday moved to 4-1 all-time against Evansville — this Purple Aces squad one that returned seven starters — by a 4-0 score at the WKU Soccer Complex.

The victory puts the Lady Toppers (1-2-1) in the win column after dropping two of its first three games.

Freshman midfielder Chrissy Tchoula started the scoring for WKU in the 32nd minute with a goal on the right side of the net off a corner kick. Redshirt junior forward Mallory Outerbridge was credited with the assist on the play — Outerbridge’s first of two of the night.

The goal provided some relief after junior goalkeeper Libby Stout exited the game with what she called a groin strain.

Katlyn Barnes, a redshirt freshman who had not seen any live action prior to Friday’s game, came on in relief of Stout and finished off the shutout. Barnes fielded all of Evansville’s four shots, saving three.

“There’s no way I could’ve done what I did tonight without the team in front of me,” Barnes said. “The last two minutes I was like, ‘I can do this.’”

Sisler joked afterward that Outerbridge’s first goal should’ve been her own. After Outerbridge assisted on the goal she did score, Sisler said all was forgiven.

Outerbridge could only default to fundamentals in her defense.

“Sydney should’ve had it, but she nailed it right at me, and all I could do was turn and shoot,” Outerbridge said. “Being a forward, you’re always taught to put the ball in the back of the net, so that’s what I did.”

Outerbridge left the game for a 15-minute stretch, then returned to score her second goal on a penalty kick after a foul. Being ahead 2-0 was not reason enough for her to stay on the bench.

“It’s the worst lead to have because if they put a goal in, then it’s anybody’s game at that point,” Outerbridge said. “I think Jason (Neidell, head coach) wanted to put the game away, so he put the starting three forwards back in.”

Neidell said that he was pleased with the way the team put Evansville under a lot of pressure, having told the girls before the game that they should be the hungriest team in the country because they had yet to record a win.

He said it was nice to see more players in attack mode and make crisper passes on offense.

“A lot of the things that we’ve been working on in practice were translated on the game field today,” Neidell said. “It was good to see us finally put the game away late in the second half.”