Commentary: Not much good to say after WKU’s loss to UK 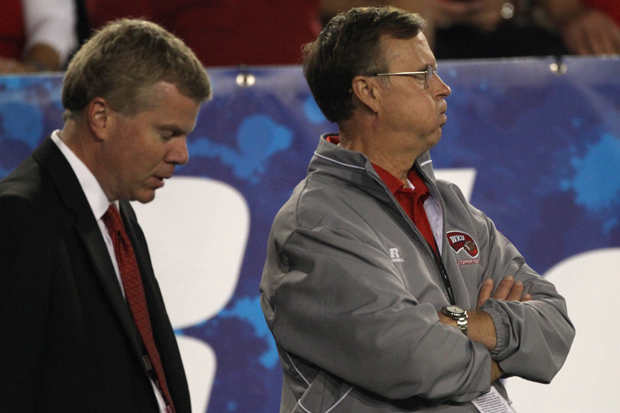 WKU president Gary Ransdell looks on in the final minutes of WKU's loss.

A few thoughts after seeing way too much blue in one day. Maybe it has me thinking negatively…

-First, you’ve gotta like Willie Taggart’s optimism after a 63-28 loss. Taggart’s whole press conference, however, did make me think back to last Tuesday, when the first-year coach said perhaps a “moral victory” had gone to the Toppers’ heads.

“I don’t know if guys were listening too much to people saying ‘Oh you guys did OK and did some good things against Nebraska,'” Taggart said last Tuesday.

Last night, the media was in large part ready for a reality check from Taggart. Ready for him to throw down some criticism after fielding a few questions that included the phrase “step back” from week one. Taggart was having none of it. He was all optimism.

I said positive things, like Taggart, after the Nebraska game. But to praise WKU blindly after that game, it would feel just a bit fake. That’s not to say Taggart’s comments were fake, but it makes me wonder if he puts on a completely different front to the media than he does the locker room. I would sure hope so.

-Attendance last night was pretty decent considering the caliber of opponent walking into Commonwealth Stadium. But the WKU contingent — while loud after Bobby Rainey made it 7-0 in the first quarter — was smaller than your average visiting section at UK.

The upper deck at Commonwealth was almost completely empty in the upper-right-hand portion, which is where visitors normally fill the stadium. So it made me wonder: Were those empty seats a factor of people tuning out the Toppers, or should we expect those missing folks to instead be saving their money in anticipation of next weekend’s home opener?

-Rainey carried for 22 times Saturday after getting it 30 times at Nebraska. The 22 carries was a sizable reduction, but for a back that’s not very sizable, maybe still a few too many. That’s especially true when you look at the number of carries Rainey had last night that simply didn’t matter.

Rainey rushed five times in a fourth quarter that the Toppers’ entered trailing 49-21. He rushed seven times in a third quarter in which WKU started down 42-14. In my opinion, those are 12 more carries Rainey won’t have the luxury of taking later in the season. There may never be a major injury for the Toppers’ only option at running back, but he will wear down, he will be less effective, and he will be less available when WKU really needs him in Sun Belt Conference play.

-The WKU defense needs to explain itself. Is this a problem with talent or scheme? I wrote after the game that the Toppers don’t have enough “Jimmys and Joes” — as Taggart would say — and I put the defensive struggles mostly on size and speed. But I’d like to hear that out of defensive coordinator Clint Bowen’s mouth before the defense is deemed a lost cause this season.

-I’m not an expert. Not going to pretend to be. But I saw a few things defensively last night I didn’t like — namely Mark Santoro blitzing while Randall Cobb was left in 1-on-1 coverage time after time. This happened on the third-and-11 situation where Mike Hartline found Cobb for a touchdown. That’s obviously not a running situation for UK — obviously not a reason to blitz Santoro and leave one of the SEC’s most explosive receivers covered 1-on-1 by an underclassman defensive back on the nation’s worst defense. But like I said: I’m not an expert.

-Now with all those negative things said, I do feel like the tale of WKU’s first couple of games is simply too much talent versus a building project. I’m confident in Taggart’s scheme, which at least early last night, utilized the run to open up the intermediate passing game. Kawaun Jakes found Tristan Jones and Jack Doyle for nice gains, then when the running game picked up in the second half, found Willie McNeal for a sizable gain through the air, too. So they have that.

But with Rainey, who is pretty much WKU’s lone offensive playmaker, long-term health is all too important. So why waste him now? Why not wait to run him 30 times against the Florida Internationals of the world?

Rainey alone will win the Toppers some games this season. But in order to do that, Rainey has to be healthy.