NOTEBOOK: Jones out for season; Andrews could play against IU 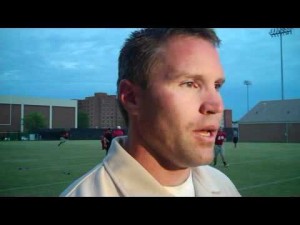 Head Coach Willie Taggart confirmed after practice that junior tight end Tristan Jones has a torn medial collateral ligament in his left knee. Taggart said Jones will have surgery to repair the knee and is done for the year.

Jones injured the knee on the second play of the Kentucky game, going down after catching a play-action pass from sophomore quarterback Kawaun Jakes.

Jones was listed as the backup tight end on the two-deep depth chart behind sophomore Jack Doyle. He also had a 17-yard reception at Nebraska.

Beyond the blow to Jones, Taggart said the rest of the Toppers are relatively healthy. He also said sophomore safety Kareem Peterson, who bruised his shoulder at Kentucky and left the field with his arm in a sling, should be ready to go at practice tomorrow.

“Other than the regular bumps and bruises, everyone else should be fine,” Taggart said.

Taggart, who hasn’t been pleased with every Tuesday practice, said today’s effort was the best start to a game week so far this season. If anything, the Toppers could stand to carry that momentum through the rest of the week, he said.

“Usually Tuesdays you’ll have more mistakes than you do later in the week because you’re just putting things in,” Taggart said. “The thing I’d like for our guys to do is be more focused on Thursday. Thursdays are the days where guys have to go in and do everything the right way. Everything’s in, and you need to get sharper on those days.”

Andrews may debut against IU

True freshman running back Antonio Andrews has been a regular on the scout team so far this year, but Taggart said the former Kentucky Mr. Football might get a chance to do the real thing this weekend.

Andrews missed more than two weeks of fall camp after leaving the U.S. Air Force prep academy, but Taggart said he might get his shot against Indiana if he proves himself.

“If he shows he can run our offense and do some things we want him to do, he will,” Taggart said of Andrews. “He’s been getting a chance since he’s been out here. He’s showing us some of the things he can do, but the things he was doing before were off cards. Now he’s got to memorize some things and show us that he’s ready to do it. If he’s not ready, then we won’t play him.”

Andrews, a standout quarterback at Fort Campbell High School, threw for 3,365 yards and 50 touchdowns, rushed for 3,368 yards and 56 touchdowns and caught one pass for a 56-yard score during his prep career.

Senior linebacker Chris Bullard had to split his time in the spring between the football field and the baseball diamond, but he said Tuesday that it’s paying dividends now.

Bullard, who was selected by the Los Angeles Angels in the 45th round of the 2007 MLB Draft, said he previously discussed playing baseball for WKU with former coach David Elson but didn’t think it could work until this past spring.

“It also gave me a feel of being on a winning team and a chance to see how they do things,” Bullard said. “I’m able to come back and take that mentality and thought over here. There were great leaders. If you ever come to a baseball practice, coach (Chris) Finwood never has to say anything because the leaders on that team step up and say it for him.

“When I’m over here, I try to do the same thing because I think it means more coming from a player.”

Taggart said he’s never questioned whether or not playing baseball has affected Bullard negatively on the gridiron.

“Chris is one of the few guys who can do that,” Taggart said. “What you like about it is that he brings the same energy on the football field as he does on the baseball field, and doesn’t look like a guy who’s doing something year-round. He’s always got a lot of energy.”

Bullard said football is his “first love,” but that if the chance to play any sport professionally presents itself, he’ll be inclined to take it.

“I want to play sports until I can’t move my legs anymore,” he said. “If it’s badminton, I’m in it. I just love sports, so that’s my plan.”

WKU Athletic Director Ross Bjork since out a message via Twitter on Tuesday saying that tickets are still available for the home opener against Indiana this Saturday.

“Hilltopper Nation: There are tickets remaining for the WKU-IU game this weekend,” Bjork Tweeted. “Our Goal=sell out, so purchase on line @ wkusports.com”

Taggart said at Monday’s media luncheon that he’d also like to start a streak of consecutive sellouts on Saturday. But while WKU will need the support of the community, Taggart said Tuesday that you can’t overlook the impact of those already on campus.