WKU takes ‘step back’ in home-opening loss to IU 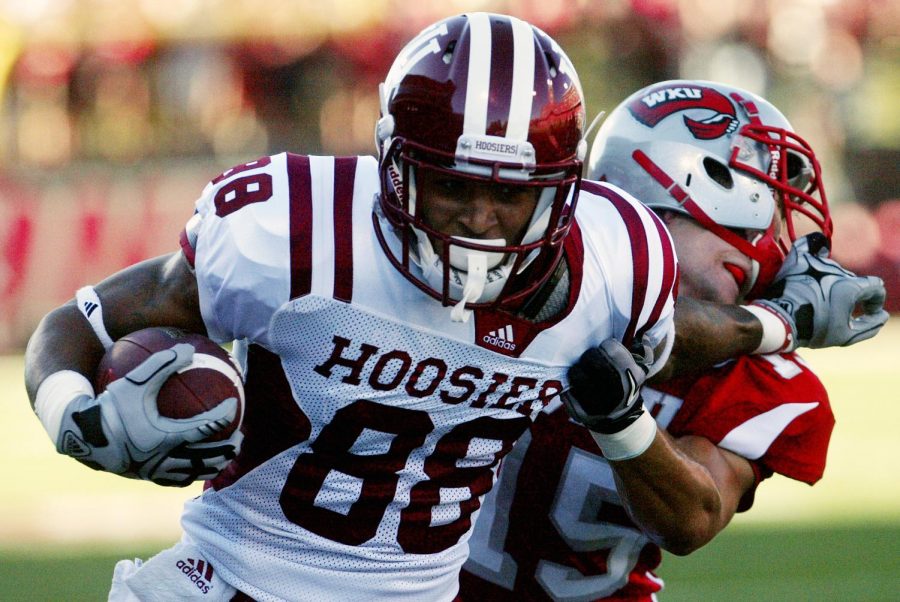 But as the scorching sun faded at Houchens-Smith Stadium on Saturday, so did Taggart’s optimism.

WKU (0-3) allowed the Hoosiers to convert 10-of-12 third downs, a key catalyst to a loss that Taggart called “a step back.”

“Our defense played a lot better until third down,” Taggart said. “You’ve got to get off the field. They had them in some third-and-longs sometimes, and we didn’t take care of business when we should have.”

Although Indiana had its way in the passing game, Taggart said he was most disappointed in the offense.

The Toppers scored first with an 11-yard touchdown run by Bobby Rainey to cap a 91-yard drive and led 7-0 at the end of the first quarter, but the offense stalled from that point forward while the Hoosiers scored 31 unanswered points.

“I didn’t think we played well at all up front,” Taggart said. “In the run game or the pass game. That’s not how we’ve been all year. We didn’t come ready to play like we’re capable of playing.”

Indiana receiver Tandon Doss returned the opening kickoff of the game for 87 yards, but running back Darius Willis fumbled on the handoff two plays later to give WKU the ball.

Rainey rushed for 62 of the Toppers’ 91 yards on their first score, but WKU managed only 197 yards of offense the rest of the way. Rainey also had just 43 rushing yards from the first drive on.

“I thought as the second quarter went on … the defense started getting their feet underneath them,” Indiana Head Coach Bill Lynch said. “Then in the second half, I think our defense came out and took control of the third quarter.”

Ewald nailed a 28-yard field goal inbetween to give the Hoosiers a 17-7 lead at halftime.

Chappell finished the game 32-of-42 for 366 passing yards and three scores.

“We had a great plan and the coaches got us prepared, but we were just a step behind,” junior safety Ryan Beard said. “We’ve got to adjust and do what we’ve got to do to get that extra step.”

The Toppers went three-and-out on their first drive of the second half, and a 16-yard punt by Hendrix Brakefield set Indiana up at the WKU 39-yard line.

Chappell punched the ball in from one yard out with 9:51 left in the third to make it 24-7, and tight end Ted Bolser hauled in an 11-yard pass from Chappell with 18 seconds left in the quarter push the advantage to 31-7.

WKU went 50 yards in just over two minutes on their ensuing drive, which Rainey ended with another 11-yard rushing score. But the Hoosiers then grinded 4:57 off the clock with an 80-yard drive, claiming a 38-14 lead with a 24-yard run by Nick Turner.

Sophomore quarterback Kawaun Jakes found sophomore receiver Marcus Vasquez for a 31-yard touchdown pass with 5:24 left in the game, but the Toppers weren’t able to come any closer.

Jakes completed 13-of-20 passes for 144 yards with the one touchdown, but said the Toppers were once again doing too little, too late.

“After that first score, we punted four or five times in a row,” Jakes said. “We just got happy feet, and then it went downhill. Then in the second half, that seems like that’s when we want to pick it up every game.”

Rainey finished the game with 105 rushing yards and two touchdowns, plus three catches for 18 yards. He’s the first WKU player since Don Smith in 1990 to open a season with three straight games with over 100 rushing yards.

The Toppers held Indiana’s running attack in check, allowing no more than 33 rushing yards to any one back, but Taggart said that was easily overshadowed by the team’s other miscues.

“If I’m frustrated by anything, it’s that we didnt’ play like I thought we were in front of our fans,” Taggart said. “I’m disappointed that we didn’t give them what they deserve.”