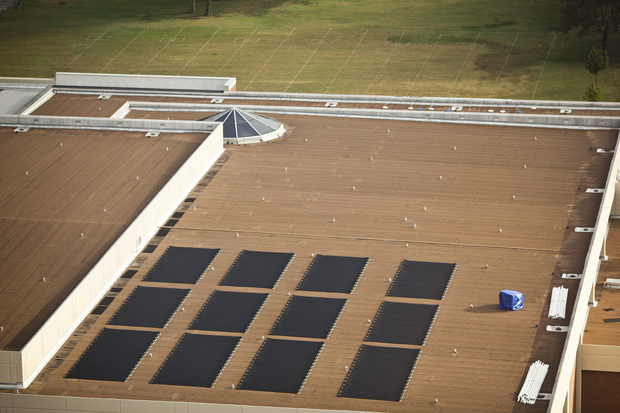 Solar collectors soak in light early in the morning on the roof of the Preston Center. The 88 panels, installed last week, heat the swimming pool in the facility. The panels will save WKU at least $10,963 annually, according to Dale Dyer, plant operations manager for WKU Facilities Management. CHRIS WILSON/HERALD

Though the sun is outdoors, the indoor pool at the Preston Center will use its radiant energy as a heat source.

Each collector contains 3.7 gallons of fluid that will transfer the sun’s energy to the pool’s water in a heat exchanger, according to a press release from Sustainability Coordinator Christian Ryan-Downing.

This process will keep the pool between 80 and 83 degrees at all times, according to the press release.

The solar collectors cost $96,410 and will be paid off over eight or nine years, Dyer said.

Dyer said an accurate calculation of the total savings produced by the collectors has been described as the “impossible question” by university officials.

“Gas prices are one of the more volatile utilities – they’re very unpredictable,” Dyer said. “But it’s safe to say that WKU is going to save at least $10,963 annually.”The solar collectors were installed as part of the solar energy project, an initiative of WKU’s Energy Savings Performance Contract with Johnson Controls, Dyer said.

The contract includes $9.7 million in energy-efficient improvements in facilities across campus, Dyer said.

While the improvements made under the contract are expensive, more than $1 million will be saved in utilities annually once the project is completed, Dyer said.

The entire project will be paid back in savings over a period of about 15 years, Dyer said.

“Projects like the solar energy project will significantly reduce the carbon footprint of the university in the process,” Osborne said.

Osborne said the money WKU will eventually save by making campus more sustainable is an added perk.