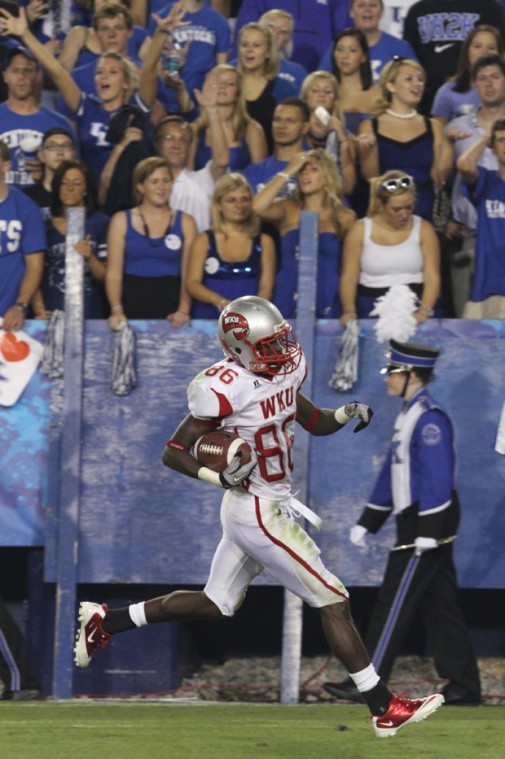 Freshman wide receiver Willie McNeal returns a kickoff 90 yards in in the second quarter of WKU's loss at Kentucky.

No one denies that Willie McNeal has some speed.

That didn’t stop Head Coach Willie Taggart from questioning whether or not he was faster than the freshman wide receiver.

Taggart said Thursday that he was all set to test his speed against McNeal last week. And then he watched McNeal break off a 90-yard kickoff return against Kentucky.

“I had challenged Willie to a race,” Taggart said. “Actually, he called me out, and I told him he didn’t want to do that. I told him, ‘OK, if I beat you, you’ve got walk on for a year and give that scholarship back. If you beat me, you don’t have breakfast check for the rest of the semester.’

“Then after I saw that kickoff return, I said ‘no bet.’”

McNeal has vaulted to 10th in the country in all-purpose yards, averaging 204.5 per game.

“I think I’ve done well so far as far as special teams go, but I’ve still got a lot to work on,” McNeal said. “I think I need to work harder on offense and try to contribute more. I’m a highly confident person, so I could see myself going wherever they put me at.”

McNeal’s touchdown was the first in 73 games that the Toppers have scored on a kickoff return.

“There really wasn’t a personal thing with that,” McNeal said. “I was just glad to see that the whole special teams was still fighting, even with the score the way it was.”

Taggart said it’s been a struggle to get McNeal and other playmakers involved in the offense after falling behind opponents early.

Junior running back Bobby Rainey will continue to be the workhorse of the Toppers, but Taggart said he’s not the only one who can get things done.

“We’ve had plenty of plans of getting Willie involved in our offense, but we just haven’t had an opportunity to do those things,” Taggart said. “We shot ourselves in the foot early in those ballgames, and it just takes away from all the things you want to do.”

Three of WKU’s biggest receiving threats, senior Quinterrance Cooper and sophomores Marcus Vasquez and Jack Doyle, have just eight combined catches for 93 yards this season. Vasquez’ 34-yard touchdown catch at Kentucky is the only score for that group.

Although they want to increase that production, sophomore quarterback Kawaun Jakes said the Toppers can’t pick who they’re going to give the ball to before they even take the field.

“Coaches always say stay the course and do what we do best,” Jakes said. “I’m not going to say, ‘Let’s go out and throw for 1,000 yards,’ or, ‘Let’s give Bobby every carry.’ We’ll take whatever’s open or whatever they give us.”

WKU may also be trying to work a couple of new contributors into its offense this weekend.

Freshman tight end Jim Murphree, a Franklin-Simpson product, has moved to second on the depth chart after junior Tristan Jones tore his MCL at Kentucky.

Taggart said Murphree’s a good example of a player being ready to step in and compete, even if it looks unlikely that he’ll be needed.

“That’s why you’ve got be locked in every single day – because you never know,” he said. “As a freshman, I got thrown in, and I was ready. I’ve told them they have a license to be ready now. They don’t have to wait until their junior or senior year.”

But no matter who’s on the field Saturday, Taggart just said he wants to see things go a little more smoothly for the offense than it did in the first two losses.

“I really want our offense to click like it’s capable of doing,” Taggart said. “We said from day one that we want to be a running team that can run when it wants to run and be physical, but we also knew that we’ve got some weapons out at receiver that can catch some balls. We’ve just got to get it to them.”