WKU will run through the T, begin other gameday traditions 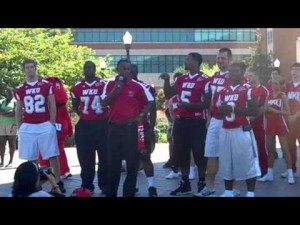 WKU’s football game days are being completely revamped, from tailgating procedure to — ideally for the athletic department — an improved product on the field.

-Athletics Director Ross Bjork Tweeted on Sept. 6 that a new tradition, courtesy of President Gary Ransdell, will begin against Indiana. The Toppers will touch a statue with a red towel in hand (view the statue here). Bjork said on Friday that the statue’s hand is cast from the same mold used on the statue of E.A. Diddle outside of Diddle Arena.

-Lindsay Thomas, of the WKU marketing department, said the Toppers have a new intro video this season featuring the song “All I Do Is Win” by DJ Khaled. The team will “run through the T,” for Toppers, when they come onto the field, Thomas said. The WKU band will make up the T. “It’s all new. Everything is new,” Thomas said.

-Kenny Perry and Dave Chandler will be WKU’s honorary co-captains at Saturday’s game, Bjork said. Perry is, of course, a former WKU golfer. Bjork called Chandler a “significant contributor” to the program.