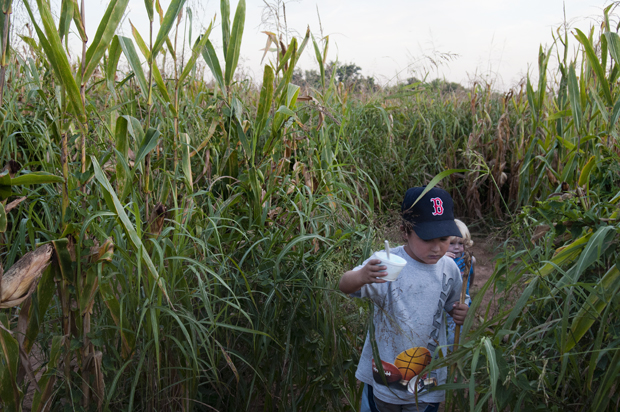 Hayden Norris, 6, and Badyn Martin, 3, of Bowling Green, make their way through the corn maze at Chaney’s Dairy Barn. The corn maze opened on Wednesday and will stay open through the fall season. DELAYNA EARLEY/HERALD

Chaney’s Dairy Barn helped start off the school year with the opening of its corn maze last Wednesday.

The theme for this year’s maze is “From the Farm to the Store.”

This will take maze-goers through the process milk goes through on the farm.

“We begin with the cow eating the grass,” owner Debra Chaney said.

Activities promoting the theme are also scattered throughout the maze, including a series of stickers detailing parts of the dairy process that customers search for to put on their cards to earn a free ice cream at the Dairy Barn, she said.

“We usually try to do something educational,” Chaney said. “That way you learn as you go through.”

The maze covers about four acres of land and takes about 30 to 45 minutes to complete with the help of a map, said Samantha Dawson, an employee at Chaney’s.

“Without the map, you may be wandering around for a while,” Chaney said.

She said this is the fifth maze that Chaney’s has had.

Chaney said their tradition is to open the maze every year on Sept. 1 in order to avoid the heat of the summer.

Chaney’s also hosts “Bring-Your-Own-Flashlight” nights in the maze after sundown every evening, she said.

“This is the most appealing to Western students,” said Chaney. “But we have to get them out of there by nine (p.m.) so no one is out lost in the maze after we close.”

Last year’s turnout for the maze was about 1,500 people, she said.

Chaney’s will celebrate its seventh year of operation this October, according to the website.