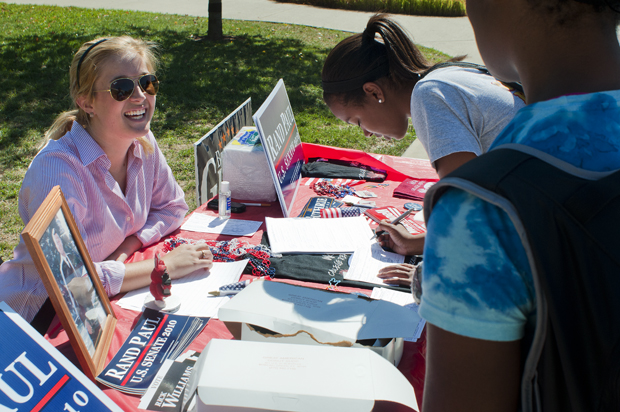 Julia Bright, a Louisville senior, registers Brittney Perry, a Baton Rouge, La., graduate student, and Bryelle Bonds, a Louisville freshman, to vote at the opening event of Constitution week Monday. Bright is the President of the College Republicans.

Rand Paul signs adorned one table, while Jack Conway signs decorated another outside of Downing University Center on Monday.

Students from College Republicans and College Democrats not only wanted passersby to support their candidates—they wanted them to register to vote.

“We’re trying to get young people engaged and politically active,” she said.

All higher education institutions that receive funds from the U.S. Department of Education are required to implement an educational program around Sept. 17 of each year, the day the Constitution was signed in 1787, according to a WKU press release.

Several departments across campus are banding together this week to create a mood of exchanging ideas about political and social issues.

Events are planned for each day this week to explore current issues and allow students to learn and voice their opinions, said Saundra Ardrey, political science department head.

“Students represent our future,” Ardrey said. “It is important to understand the foundations of the Constitution to secure our democracy. It’s essential.”

The theme of Constitution Week this year is 18th Century Constitution-21st Century Issues. The events will cover issues such as citizenship, religious freedom, the environment and voting registration.

“With the midterm election, so many issues that are hot political and social issues go to the root of democratic society,” Ardrey said.

Bright said it’s very important to get young people registered to vote and knowledgeable about the issues.

“It’s a great way to bring awareness to the political system and get people involved,” Bright said.

“It’s important to get out and vote even though it’s not a presidential election,” he said.

Students were also given the chance to express their opinions on boards set up where they could write messages.

“Should we allow a mosque at Ground Zero?” one of the boards asked.

Some students argued, “Yes,” because of religious freedom, while others argued it is important to be sensitive to the victims of Sept. 11 families.

Constitution Week events were outlined in the press release:

■ Tuesday at 2:30 p.m.: there will be a panel discussion at the Faculty House on issues dealing with the 14th Amendment, such as illegal immigration.

■ Wednesday at 4 p.m.: a student-led discussion, “New York Times Topper Talk,” will take place at the Institute for Citizenship and Social Responsibility in the Garrett Conference Center.

At 7 p.m., Sheila Orsted will discuss “Toxic Racism: Environmental Injustice in Your Backyard” in the Garrett auditorium.

■ Thursday at 6 p.m.: attendees can join in on “Beyond the Veil: An Open Conversation with Muslim Women and Men,” in the ICSR in Garrett.

■ Friday at 11 a.m.: the Constitution Day Birthday Bash will take place on the Grise Hall front lawn, with music, hot dogs and games.

■ All week long, the Women’s Studies Program will be distributing “Resist Invisibility” playing cards to represent the many groups of people that were not represented at the Constitutional Convention.

Participants can collect the cards by attending Constitution Week events. After collecting a set of eight, players should turn them in to the Women’s Studies Center by noon on Friday to get in the drawing for an iPod.