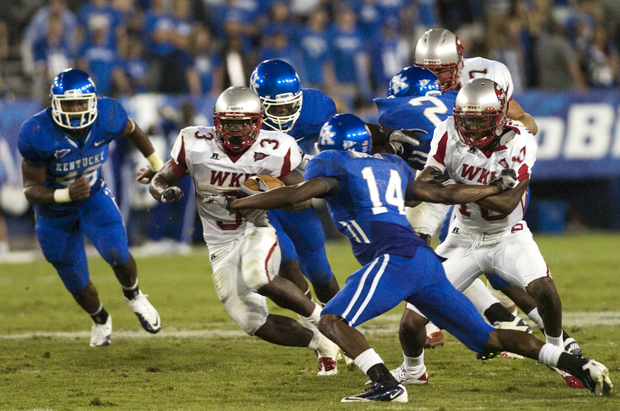 Junior running back Bobby Rainey rushes during the 4th quarter.

LEXINGTON — Head Coach Willie Taggart made a statement last spring that has rang true through the WKU football team’s first two games: “It’s not about the Xs and the Os, but the Jimmys and the Joes.”

Because this bunch of Toppers has one Jimmy, junior running back Bobby Rainey, and one Joe, freshman receiver Willie McNeal.

But in a 63-28 loss at Kentucky Saturday night — one that saw Rainey rush for 184 yards on 22 carries and McNeal tally 204 return yards on seven tries — that’s not going to be enough.

Not when WKU is kicking itself in the foot with seven penalties for 50 yards.

“We just hurt ourselves, and we shouldn’t be in that position,” Rainey said.

Some have proven talented — sophomore tight end Jack Doyle and sophomore quarterback Kawaun Jakes, for example — but in terms of consistency and playmakers and guys that will win WKU football games, it’s all Rainey and McNeal.

Otherwise known as the Jimmys and the Joes.

“If it’s going to take me carrying the ball, that’s what I’m going to do,” Rainey said. “There’s no pressure at all. I don’t believe in that.”

Jakes felt some pressure with the score tied at seven apiece in the first quarter. WKU faced third and 11 from their own 19 after a false start penalty began the drive on a sour note.

Surrounded by UK defenders, Jakes tried to dump the ball off to a second option — one well short of moving the chains — but was intercepted by junior defensive lineman Luke McDermott. That gave the Wildcats possession at the Toppers’ 19-yard line, and quarterback Mike Hartline walked into the end zone two plays later.

Taggart said Jakes “shouldn’t have thrown the ball.” It was a precursor to the rest of WKU’s night.

“Turnovers — turnovers where they get the ball in great field position,” Taggart said. “That’s why the score looked why it is. Offensively, we didn’t give our defense the chance to go a long distance.”

The floodgates opened in the second quarter. WKU was out-gained on offense by UK, 175 yards to two. Rainey was the one option at tailback. And the Toppers’ offense sputtered.

“It was penalties after penalties at one point in the second quarter,” Taggart said. “We’re not good enough to do that.”

Not good enough yet. Not good enough, because if McNeal and Rainey aren’t doing it on offense, it’s not happening. The last thing those guys need is something in the way, whether it be turnovers or penalties.

Rainey was aided by one rush apiece from Avery Hibbitt and Keshawn Simpson. Sophomore receiver Marcus Vasquez returned the one kick that McNeal didn’t for 14 yards. Jakes — he was 8-for-15 for 97 yards.

The rest? Less than a combined 50 yards.

And it’s no coincidence that WKU’s losing streak increased to 22 games.