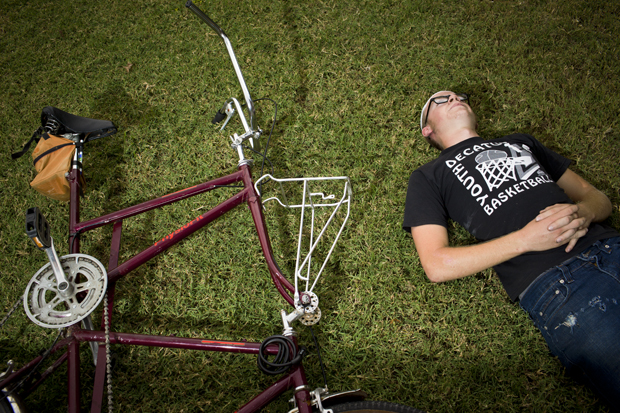 Freshman Ben Rogers welded two bike frames together to make a tall bike and uses as a main source of transportation. Rogers has been interested in bicycles since high school and plans to carry out the hobby throughout his life.

Until Ben Rogers rolled up on his handmade, double-decker bike, a clown on stilts blowing balloon animals garnered the attention of the crowd outside of Pearce-Ford Tower.

But Wilmore freshman Rogers took the air out of the clown’s balloon show, and the PFT courtyard grew full with shouts of, “What the heck is that?” and “Let me ride it!”

“I’ve already been identified on campus as ‘the guy with the bike,'” Rogers said. “It’s unusual – I will give them that.”

One student hounded Rogers until he agreed to let him ride the bike.

“I like to let people ride it, but I always say, ‘I’m not liable for your injuries’ before they get on,” Rogers said. “Some people can figure it out pretty well, and other people don’t realize that it’s just like riding a bike, only 5 feet in the air.”

Rogers collects old bikes, and he isn’t really interested in any bike made after 1995.

He and a friend figured out how to build his double-decker ride out of two identical bikes.

Although it’s not as fast as a conventional road bike – and definitely not as light at 50 pounds – Rogers said that he can ride it pretty much anywhere, even on a 60-mile, two-day trip.Rogers said he rode bikes as a kid but stopped when he got a car.

That changed last October when he found an ‘80’s-era 10-speed bike at a thrift store for $5, he said. Now bikes are his main source of transportation.

“I started riding that around, and my collection grew in a matter of months, and so did my skill,” Rogers said. “I can see this as being a lifelong hobby. Just finding a bike in a thrift store kind of started it all.”

Rogers is well-known, made evident by the amount of high fives and “shout outs” he collects as he rides around campus.

One of his friends, Rob Vinson, a senior from Virginia Beach, Va., said Rogers would be “the most known kid on this campus by next week.”

Several of Rogers’ other friends, who hadn’t seen his tall bike, became nervous as he circled dangerously close to a flight of steps, but Vinson didn’t bat an eye.

But Rogers doesn’t always handle with the composure Vinson acknowledged.

He and the wheeled goliath have crashed multiple times.

“Crashing isn’t as scary as it looks,” Rogers said. “Since it’s so high, you kind of start to notice that it’s falling.”

Outside PFT, Rogers chatted with another biker, Steve Briggs, assistant director for Housing and Residence Life, about the interesting way he mounts the bike, which he describes as a running and jumping procedure.

“Being a shorter guy, when I first saw the bike and how tall it was, I was just interested in seeing how Ben got on it,” Briggs said. “It’s nice to meet him and see the creativity we have on campus. It’s also good to see that people are riding bikes.”

Rogers’ love for cycling extends to attending a group advocacy ride for bike safety and awareness called “Critical Mass,” which happens on the last Friday of every month in Bowling Green.

“People need to ride bikes more,” he said. “It’s a really freeing mode of transportation, and it’s definitely the most enjoyable, because you get to experience all the sights and sounds and smells of your trip, and you remember them more so than when you’re trapped in your car.”