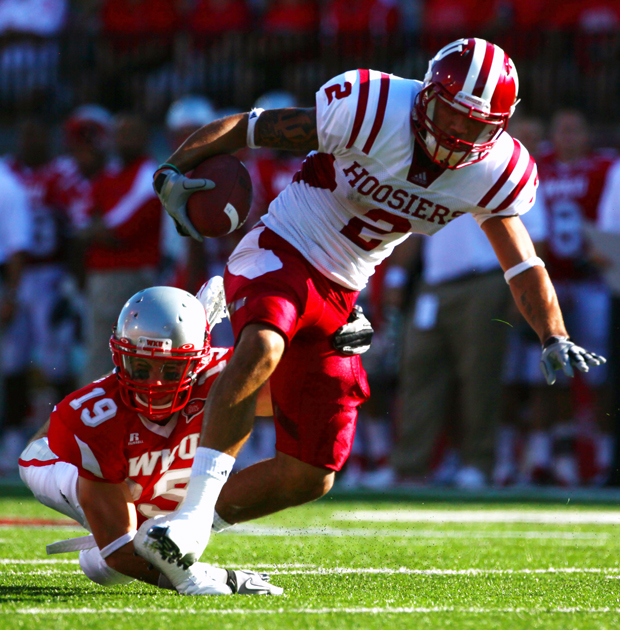 Indiana receiver Tandon Doss shakes free from WKU safety Mark Santoro during the second quarter of IU's 38-21 win over WKU. Doss was a frequent target of IU quarterback Ben Chappell, who completed 32 of his 42 passes for 366 yards.

The WKU defense held its ground on first and second down Saturday night.

But the 12 times they forced Indiana into a third-down situation, the Toppers lost their footing.

“We have to get better on third downs,” Taggart said. “The same thing happened last week. Our defense is playing hard and getting them in that situation you want them in and not closing the deal. We’re not going to be a winning football team until we learn to do those things.”

Junior safety Ryan Beard, who recorded eight tackles in the game, said the Toppers were never able to really feel comfortable in a third-down situation.

“That’s absolutely not going to get it done,” Beard said. “They were either a step ahead of us or we were in the wrong coverage, and that can’t happen. To be a good defense, you’ve got to come out and be really steady on third down.”

The main source of WKU’s frustration was Indiana senior quarterback Ben Chappell, who passed for 366 yards and three touchdowns.

“Chappell’s going to do that all year — he did it all last year,” Taggart said. “The kid’s a good football player, and they have some good receivers, but in that situation, you’ve got to win some one-on-one battles. At times, we were just a second too late.”

Chappell completed 32-of-42 passes in the game, spreading the ball around to six different members of a taller-than-average receiving corps.

“They had some trees over there, and we have some grass on our side,” Taggart said of Indiana’s receivers. “Those guys are big, but that’s no excuse for not taking care of your job.”

Staying on even keel

Plenty of coaches say that their team doesn’t know how to deal with adversity.

Not as many point, like Taggart did Saturday, to success as an obstacle.

“Our team’s got to do a better job dealing with the highs and the lows,” Taggart said. “We have a high and get excited, and then we lose focus and put ourselves in those third-and-long situations. It’s hard to make a play call on third and 20.”

“When we had Bobby’s touchdown, we’re all up, and then one bad thing happens, and it’s that snowball effect,” Beard said.

Taggart suggested the Toppers’ 23-game losing streak as a big reason for the complacency after striking first.

Sophomore quarterback Kawaun Jakes agreed, saying that it’s hard to act like you’ve been there when you haven’t tasted victory in nearly two years.

But going out and taking a win is easier said than done, Beard said.

“We just need that one turning point in our season that shows us that it’s okay for us to be successful — we don’t have to lose another game,” he said. “It’s that one point that just clicks. I don’t know what it’s going to take, but we need to go find it.”

There weren’t many things that pleased Taggart after the game, but the play of a few freshmen was one of them.

Taggart elected to use true freshmen cornerbacks Tyree Robinson and Arius Wright frequently in the second half, and he said he came away impressed.

“Those guys came in and actually played the corner position like you’re supposed to play it,” Taggart said. “Guys coming up and tackling, hitting like they’re supposed to. I don’t think those guys got beat on any passes deep or anything, so I think we found some young guys that can help us.”

Freshman wide receiver Donald Campbell played for the first time, debuting with a 46-yard kickoff return in the second half. Campbell also ran the ball once for two yards and had an 18-yard reception.

“We always felt like Donald was a guy that could help us,” Taggart said. “He brings a little more speed to our football team. We knew what he was capable of, and it was just a matter of getting him in there once he was comfortable with the offense.”

When asked if Campbell returned kickoffs in the second half because receiver Willie McNeal was injured, Taggart replied that McNeal simply wasn’t getting the job done.

And if Taggart’s made one thing clear, it’s that he’ll give a younger player the same chance as everyone else.

WKU’s opening scoring drive of 91 yards was the team’s longest since a 94-yard march at Troy on Nov. 8, 2008 … Indiana’s first punt of the game didn’t come until there were just over three minutes left in the game … WKU was held to 53 combined yards on five drives while the Hoosiers scored 31 unanswered points in the game … Sophomore receiver Marcus Vasquez’ touchdown in the fourth quarter was his second of the year, matching his total from all of last season.