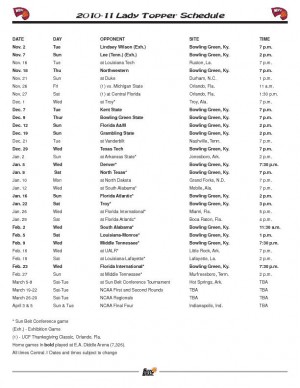 WKU’s 2010-2011 women’s basketball was released on Tuesday featuring a slate of 14 home games and six contests against NCAA Tournament teams from last season.

“We’re very pleased with the type of challenge we’ve been able to put together this year,” said Head Coach Mary Taylor Cowles. “Again, and I’ve said it in years past, it’s the kind of competition that we want to be associated with at WKU with women’s basketball.”

Although the Northwestern game is the only home game in Novemeber, five of the Lady Toppers’ seven December games will be played at home.

Cowles said an early stretch — including games at Duke, on a neutral floor with Michigan State, at Central Florida and at Troy — will be an especially difficult start to the season.

“It can really help us to mature a lot quicker and come together a lot quicker — not only because we’re on the road but because of the competition we’re against,” Cowles said.

Sun Belt Conference play begins Dec. 1 at Troy. It picks up again on Jan. 2 at Arkansas State and is interrupted by just one non-conference opponent, North Dakota, on Jan. 10, before the Sun Belt tournament in Hot Springs, Ark.

A lack of New Orleans, which moved out of the Sun Belt last July, reduces the number of conference games from 18 in the past to 16 this season. It also took another home game off the Lady Toppers’ schedule.

“We had to have home games — you can ask our athletic director,” Cowles said. “We were in a position where home games were needed.”

WKU’s first exhibition is Nov. 2 against Lindsey Wilson College. Its final tuneup before regular-season play begins is an exhibition against Lee (Tenn.) University on Nov. 7.

The Lady Toppers will get started practicing under new NCAA regulations, Cowles said, which allows teams to begin practicing exactly 40 days before the team’s first regular-season game. Out of those 40 days, Cowles said WKU can’t practice more than 30 days.

With practice beginning 40 days before Nov. 16, Cowles said she expects practice to begin during WKU’s fall break — another challenge with this season’s schedule.

“It brings about a new concept that we haven’t dealt with,” Cowles said. “I like it. Obviously I want to be in the gym and I enjoy practice and game time.