Skinner stands out in WKU’s win over Belmont 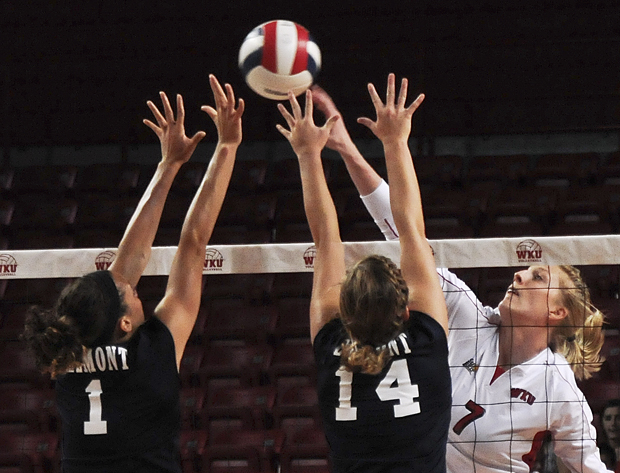 Jordyn Skinner had something other than a stat line on her mind Tuesday night.

But in extending the Lady Toppers’ undefeated streak against Belmont, another solid stat line followed for the sophomore outside hitter.

“The undefeated record motivates us,” Skinner said. “Our goal was just to play just as hard and just as good. It’s about knowing that we can do it and having that fight.”

Skinner finished with six kills, 12 digs and a .385 hitting percentage — the kind of night Head Coach Travis Hudson hadn’t seen from Skinner in a few matches.

“Jordyn always does so many things for our team, but tonight she really gave us a spark offensively as well,” he said.

Skinner laced up the fighting gloves in a second-set battle that featured 16 ties and seven lead changes.

When Belmont leapt ahead, 25-24, freshman setter Melanie Stutsman set up a gem, and Skinner delivered the game-tying kill.

It was the kind of performance that Stutsman said makes her setting duties simple.

“You know that no matter what how the set is, whether it is on the net or off the net, a good set or a bad set, she is going to take care of it,” Stutsman said. “It is good to have someone out there you can trust.”

Hudson attributed the sophomore’s “spark” against Belmont to finally being cleared this week by the training staff from an ankle injury that plagued her at the start of this season.

“Maybe she is kind of just is getting her feet back under her,” Hudson said. “She had a terrific terrific preseason, and hopefully we can get her back to that form.”

With a match against Belmont in the books, the Lady Toppers will now face a series of nine straight Sun Belt Conference games in a row — just the kind of fight Skinner said she’s been preparing for.

“We have learned a lot about ourselves in these games,” Skinner said. “We can’t let down for one match or one point. We have to play every match like it is the last.”