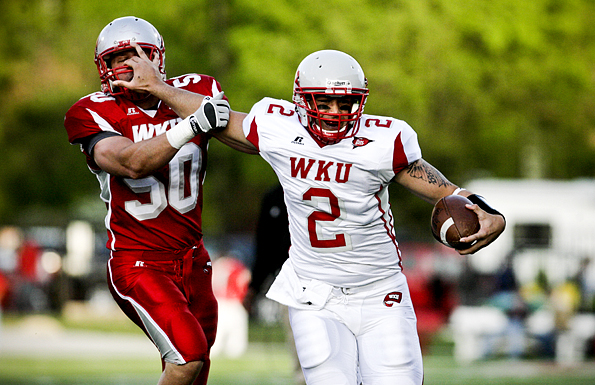 This story was originally published Aug. 10.

In what has become a recurring theme at Western over the past few years, the Toppers enter this season with a question mark at quarterback.

But make no mistake about it – Head Coach Willie Taggart says the uncertainty won’t stay for long.

“We’re going to have one guy – I don’t believe in two quarterbacks,” Taggart said at the team’s media day Tuesday. “There’s no such thing. I get fired up every day wondering who it’s going to be that day and who’s going to step up.”

Quarterbacks coach Mike Sanford said that WKU has a unique situation, in that all three are capable of leading the offense.

“We’re pretty thin in that group from the standpoint of numbers, but I feel really good about the quality of those three,” Sanford said. “All three of them are very capable of being a starting quarterback in Division I football, and to be honest, in the five or six years I’ve been around it, I’ve never had three in a position group where I felt that way.”

Sophomore tight end Jack Doyle agreed about the quality of the group, saying that he sees good intangibles in all of them.

“It’s a competition every day, and we’ll see who comes out,” Doyle said. “They all have that leadership quality in them, and I feel like they got that from being quarterbacks their whole lives. All of them do good things, we’ll see them compete, and we’ll see who’s starting.”

Jakes was the incumbent starter entering spring ball, but an ankle injury suffered playing pickup basketball forced him to the sidelines.

Sanford said that the experience “opened Jakes’ eyes,” showing him that his position wasn’t safe.

“He’s doing a great job in our meeting sessions,” Sanford said of Jakes. “He’s taken his note-taking and his meeting preparation to another level – I see him with his highlighters out. He’s taken to a lot of stuff I’m trying to preach to him, and that’s encouraging.”

With Jakes injured and Doughty not yet on campus, Pelesasa, a junior college transfer, got most of the snaps under center during the spring.

“He was really the only one who was available and ready to compete due to a number of different reasons,” Sanford said. “He’s a guy who’s very efficient. He has some experience in this type of scheme from high school, he’s been trained well, and he’s very coachable.”

Doughty, a Rivals three-star recruit from Davie, Fla., is just two days into his time at WKU, but both Sanford and Taggart said they’ve been pleased so far with the way he’s responded.

“He’s a young pup, but he brought a little to the table yesterday in practice,” Sanford said. “He’s got a great energy about him, he’s hungry to be a good quarterback, and he’s going to put the work in. He’s probably more prototypical size-wise, but he’s young and he’s got a lot of great room for development.”

Sanford said that helping the team get in position to score points will mean more than individual stats this fall, and drive charts will be kept by the coaching staff to monitor the situation.

The point is to never let any of the candidates feel too safe or too comfortable, Taggart said.

“Those guys have got to be consistent,” he said. “We’re not going to have a winning football team until we have a consistent quarterback. That’s what I’m looking for – a guy that come in and be consistent, day in and day out, on and off the field.

“That comes with the position, you have to do it, and I’m going to be looking for it.”