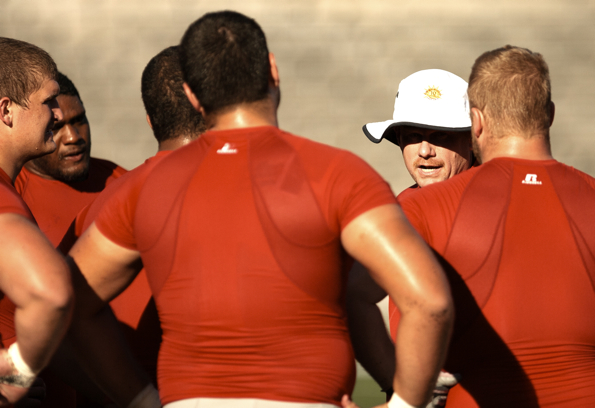 Members of Western's offensive line gather with coach Walter Wells Monday. The line has turned its back on the media, declining interviews until the Toppers snap their now 20-game losing streak.

Most people generally think of offensive linemen as men of few words, but they don’t get much quieter than Western’s front unit.

“It’s important to those guys. They really want to win a football game,” Head Coach Willie Taggart said. “They took that among themselves. That was news to me. They’re putting the pressure on themselves … and I’m fine with it.”

The buck doesn’t stop with just the players, either. Offensive centers and guards coach Walt Wells agreed to an interview with the Herald on Monday, but was then urged by the linemen to join the boycott.

“A lot of times those guys don’t get recognition anyways, so they’re used to it,” Taggart said. “I call those guys the tunnel workers. They’re like the infrastructure of the country, and it’s kind of the same way with linemen.

“They don’t get a lot of credit. You don’t hear anything about the tunnel workers, but they make everything happen for them.”

The unit will be one of the Toppers’ most experienced, with graduated center Cody Hughes as the only significant contributor lost.

“Those are guys you look up to and those are the guys you’re going to listen to, and for them to have that experience and show that leadership is big for the team,” sophomore tight end Jack Doyle said.

The O-line has taken their silence seriously. It took everything media relations could do to corral King for an interview for a game program Friday, and Doyle started to question Monday whether he would be “in trouble” for talking about the group.

But Doyle said he’s not surprised by the solidarity they’ve shown. That’s just their style.

“Togetherness is really the first thing I think of when I think of the offensive line, and how they have to come together for it to work with all of the different protections we’re putting in,” he said. “They’re getting better at it every day, and that’s the most important thing.”

Western currently has junior left tackle Wes Jeffries, senior left guard Mychal Patterson and King – all of which started last season – penciled in at the top of the depth chart along with sophomore right guard Seth White and freshman center Sean Conway.

Several players with big potential, such as sophomore tackles Adam Smith and Ed Hazelett, are also waiting as reserves.

With so much experience up front, Taggart said the linemen are the perfect fit for what will be a much more talented offense than past years.

“I think they’ll be the heart of our football team,” Taggart said. “We’ve got to develop a physicality up front. We’re going to set an identity, and it’s going to start with those guys – the O-line and the fullback.

Doyle said he expects the O-line to be crucial to the offense’s success. And who knows, if they have enough success, the media may be hearing from them again sooner rather than later.

“Once you get the confidence from the quarterback and the running back, the offensive line gets it,” Doyle said. “And once they have that confidence, they’re just rolling.”