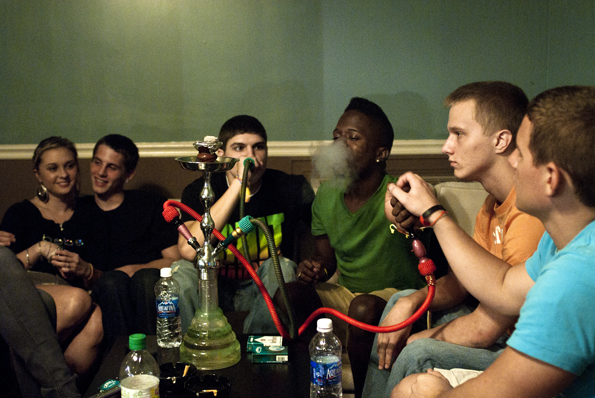 Campbellsville freshman Zach Faulkner and Vincent Taylor, center, smoke a hookah as others pass around the hose at the newly opened Prince Hookah Cafe Lounge on Saturday night.

Hookah has been a big part of Omar and Nas Amiras’ lives for a long time. Omar Amira can remember going to his grandfather’s shisha bar after school in Jerusalem.

“People would meet at the coffee shop to smoke and play cards,” he said.

His grandfather’s shisha bar has been in the family for about three generations now.

Omar Amira, 31, and his brothers helped run their grandfather’s business. It was this experience that inspired Omar and Nas to open a hookah bar of their own in the U.S. when they immigrated here in 2005.

The brothers opened their first hookah bar, Prince Hookah Cafe Lounge, in Lexington about five years ago near the University of Kentucky.

The bar offers 45 different flavors including apple, watermelon and orange. It also offers snacks such as fries and panini sandwiches along with hot and cold drinks, including smoothies.

Omar Amira said the location in Lexington has been successful.

“About 95 percent of our business there is from college kids,” he said.

Omar Amira said he plans to put up a tent over the outdoor patio at the Bowling Green location and add a heater so that people can go out there to smoke in the winter.

Ethan Hobaica, a freshman from Spring Hill, Tenn., said he found out about the opening from some flyers that were being passed around during the MASTER Plan cook-out the previous day.

He said he thinks students will be attracted to Prince’s because it’s within walking distance from campus, and it’s “cheap.”

WKU graduate Jimmy Huntsberry is the owner of the other hookah bar in town, the Saharan Lounge.

He has been in business since last October.

Huntsberry said he also has plans to expand his bar, but has been waiting for more money to do it.

He said he thinks that Prince’s will affect his business because of the vicinity to campus, but he welcomes the challenge.