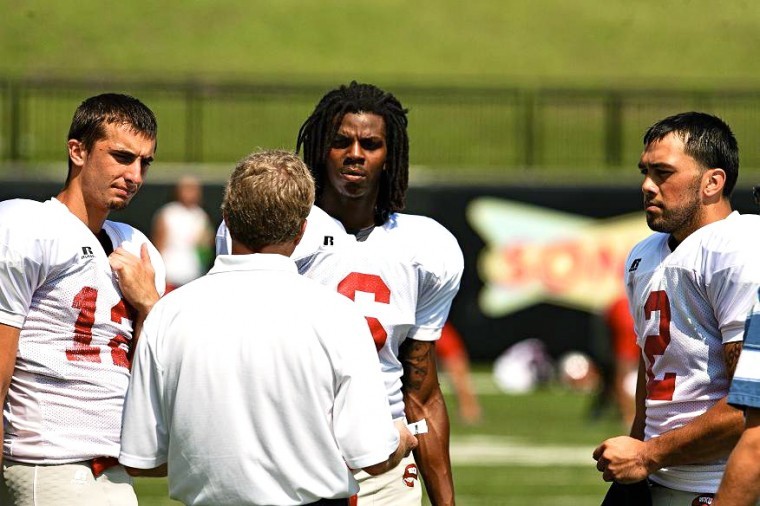 Junior Matt Pelesasa, who transferred to Western in the spring, connected with junior running back Bobby Rainey for a big-time score of about 30 yards.

Sophomore Kawaun Jakes, the incumbent starter from last year’s 0-12 season, followed on the next drive with a 65-yard bomb to receiver Quinterrance Cooper.

And why wouldn’t one quarterback show up the other? Head Coach Willie Taggart said it’s a battle that’s been tightening since fall camp began last week.

“Every year, as long as I’m head coach, we’re going to have some competition at that position,” Taggart said. “We need it. We need the best out of those guys all the time.

“Kawaun had a really good day … but again, Matt made some good plays. Both those guys are coming. I’m happy with where we’re at with those guys, but they’ve got to continue working to separate themselves.”

Taggart said this weekend that Pelesasa and Jakes have started to distance themselves from true freshman Brandon Doughty.

Taggart hesitated to say that Doughty, a Rivals three-star recruit from Florida, was out of the running for the starting job, but that it would be an uphill climb to do so.

“They’re farther ahead than Brandon,” Taggart said. “As camp goes on and we put more offense in, it’s clouded Brandon’s head a little bit. But he’s still making some plays and still understanding. One thing I like about the kid is that he picks up on the offense pretty quick, and he’s taking control of the huddle when he’s in there.

“But from the entire knowledge of the offense and everything that goes on, he’s behind those other two.”

Tuesday was the first day that the quarterbacks were available to the media for interviews. Taggart had requested that reporters hold their questions for the trio, wanting to allow them a chance to settle in during the first week.

“We’re just trying to come in and get better every day,” Jakes said. “It’s still a new offense to us, but everybody’s out here trying to learn and paying attention in meetings and practicing hard.”

Pelesasa entered fall camp as the starting quarterback on the depth chart, a product of having received almost all of the snaps during spring ball while Jakes was out with an ankle injury.

A junior-college transfer from the College of San Mateo, Pelesasa threw for 183 yards and two touchdowns in Western’s annual spring game.

It was a tumultuous spring for Jakes. The sophomore, who claimed the starting job last season after a strong showing at Navy four games in, quickly worked his way into Taggart’s doghouse when he suffered an ankle injury playing pickup basketball.

But Taggart said he’s seen a renewed energy in Jakes since the spring, trying to prove to the first-year coach that he’s not a “bad kid.”

“I had to work hard,” Jakes said. “I feel like I let my team down, going to do something that wasn’t football-related, and I knew to get my teammates’ trust again, they had to see me working hard. Like coach Taggart always said, they build off that.

“They see the quarterback doing what I’ve got to do, and it makes them go harder.”

Taggart praised the performance of Doughty on the first day of practice, but the freshman has gradually begun to work more with the third string.

Doughty also had offers from Mississippi State, Colorado State and Florida International among others, according to Rivals.

“I see the fire in his eyes right away that he wanted to get in there and wanted to be the guy,” Pelesasa said. “That’s definitely what you need to do at the quarterback position, and it’s what you need to do when you first come up. Most guys say, ‘I’m going to play when I’m a junior or senior.’ No, he has the right mentality.”

Doughty said the 24/7 nature of college football has been a challenge, as well as trying to earn the respect of his teammates as a true freshman.

“It’s been a pretty fun adjustment,” Doughty said. “Coach Taggart and coach Sanford have been getting on me every day, and we’ve been working out some kinks in the offense. The speed’s been a little different, but it’s nothing you can’t handle.”

Each quarterback brings something different.

Pelesasa has the strong arm capable of the deep ball. Jakes has the experience and mobility, and Doughty has the prototypical body of a pocket passer.

But as Taggart has said many times, the one thing he wants to see across the board is consistency.

“With this offense, as a quarterback, you’ve got to be unbelievably focused on every single play,” he said. “One little mistake can mess up an entire offense, but those guys like it too because they have a lot more options now.”

All three got the best out of their wealth of targets Tuesday. With the receivers stepping up to make big catches and unlikely players also getting into the act, Taggart said he saw a lot more smiles on the trio’s faces.

“You see those guys coming back fired up,” Taggart said. “I see Kawaun throw a touchdown and run down and get excited with the receivers, and that’s what we want. When you have some success, you’ve got to get fired up about it.

“It’s happening a lot more now, so I see those guys getting more comfortable with what we’re doing.”

Pelesasa said he’s not surprised that things are beginning to click, because it’s simply a process.

“It was really good for us to get into the playbooks and learn all the plays in the spring, and then Brandon came in, and the first thing he did was open his playbook every day,” he said. “I think we’re starting to grasp the offense a lot better, and it’s starting to show on the field.”

All three quarterbacks agreed that the competition has helped them build a friendship on and off the field. It’s a bond that makes it impossible for them to wish bad things on each other, Pelesasa said.

But while Taggart said you don’t have to wish misfortune upon your competition when you’re in a position battle, you do have to start outshining it.

“I told those guys, ‘Don’t look for us to give you anything,’” Taggart said. “’We’re not giving anybody anything around here. If you want it, you go take it.’ That’s what it takes – you’ve got to take somebody’s job and keep it.”