WKU’s Brooks leaves receiver instincts behind with move to secondary 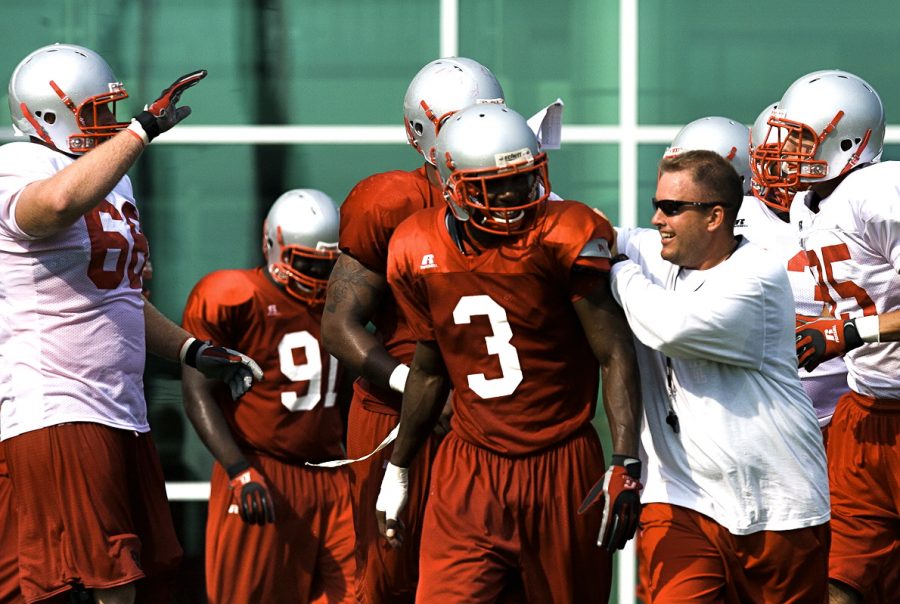 Junior cornerback Derrius Brooks said when a pass goes up in the air, his first instinct is still to look over his shoulder for the ball.

It’s the kind of habit a player has to break when switching from wide receiver to defensive back, a move Brooks made just one week ago for Western.

He’s currently listed as a starting corner on the team’s fall depth chart, but defensive backs coach Clayton White said Brooks still has plenty of work to do.

“We know what Derrius can do – he can run and he can catch a football, and that’s what corners do, but they tackle as well,” White said. “Most guys just think of a corner covering a receiver, but they have to read and react, and if you haven’t done it, it can be difficult.

“He’s just got flip the script and go from a prima donna to a dog, basically. That’s plain and simple, and it doesn’t happen overnight.”

Brooks’ speed has always been his calling card.

The Fortson, Ga., native even ran track for Western during his redshirt season in 2007, helping the 4×100-meter relay team qualify for an NCAA Regional. He missed qualifying individually in the 100-meter dash by just .04 seconds.

When Head Coach Willie Taggart arrived for practice this spring, he said he didn’t see any spark from the 5-foot-10 receiver.

But after moving Brooks into the defensive backfield, Taggart said that flame was sparked again.

“I’ve seen a different mentality than he had at receiver,” Taggart said. “He’s starting to get that defensive mentality – talk a lot of trash, but he’ll go out and back it up. He’s starting to get a little swagger about him, where he feels like he’s better than the guy he’s lining up against.

“It’s good to see, because I’ve never seen it from him since I’ve been here. I like to see he’s developing a personality because it means he’s comfortable and he’s excited about playing that position.”

Western is in desperate need of a similar spark throughout the entire secondary. The Toppers surrendered an average of 233 yards per game through the air last season and recorded just six total interceptions.

Junior safety Mark Santoro, who led that secondary with 91 tackles in 2009, said he hopes Brooks can breathe some new life into the unit.

“I’m glad he’s off offense now, because that guy can fly,” Santoro said. “He’s doing a great job. He didn’t have any chance to work on it in spring, so the progression you’re seeing is all in camp. When you get a little tired, you need to force your technique, and I think he’s doing a better job of that. He’ll do some good things for us.”

With six true freshman and no seniors in the secondary, White said the defensive coaching staff has been stressing making the most of reps, whether it be 10 or 50.

That competition brings a sense of urgency, Brooks said, and it means it’s time for him to stop thinking about the big score and start taking them away.

“I think I’m just adjusting really well,” he said. “It took me a couple days to get everything in sync … but I’m picking it up quick. I think it’s a great move for me.

“You’ve got a lot more plays and you’re going against bigger guys, so you’ve really got to hit them. I’m not trying to get away from somebody anymore – I’ve got to go in and not be scared and hit them.”