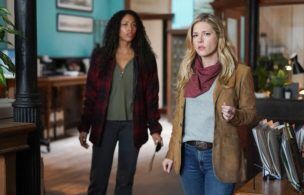 It’s been months since we visited Big Sky country, but in the April 13 episode, matricidal trucker Ronald Pergman (Brian Geraghty) is still on the run, and Montana private detectives Cassie Dewell (Kylie Bunbury) and Jenny Hoyt (Katheryn Winnick) are still on his tail.

“He’s gonna come back and wreak his own special kind of havoc,” warns executive producer Ross Fineman. Ronald’s No. 1 target: Jerrie (Jesse James Keitel), the sex worker who escaped his clutches and now works for the PIs. Look for additional help from a deputy U.S. marshal (Omar Metwally, The Affair) who has history with the fugitive. Per Fineman, “He’s an odd duck.” See AlsoThe ‘Big Sky’ Stars Describe the Thriller in 3 Words (VIDEO)
Plus, get a sneak peek of Episode 3.

Cassie and Jenny are also pulled into a new case involving a powerful ranching family headed by ruthless Horst Kleinsasser (Ted Levine). Jenny is contacted by Horst’s eldest, Blake (Michael Raymond-James, Billions) — an old boyfriend who just moved back from New York — about some legal entanglements.

Meanwhile, war rages within the family. Horst is ill, and though company control should legally pass to the first son, younger brothers JW (Kyle Schmid, Six), who is Horst’s carbon copy, and “loose cannon” Rand (Ryan Dorsey, Stumptown) “are not happy with that,” Fineman says. Even Blake has lost favorite-son status by leaving and disrespecting the family. Don’t get too attached to anyone — this is the show that killed off its leading man (Ryan Phillippe) in the first episode. In fact, Fineman says to expect “both intentional and accidental deaths.”