9 Things to Remember for ‘Fear the Walking Dead’ Season 6B 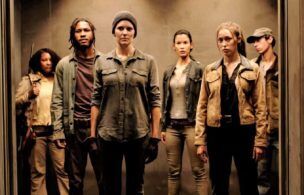 9 Things to Remember for ‘Fear the Walking Dead’ Season 6B

It’s been six months since Fear the Walking Dead was on our TV screens (blame the pandemic, which interrupted the show’s filming schedule!). With the typical Walking Dead midseason hiatus being around three months, this break was twice as long as usual — and it’s more than possible that during that time, some of the details of Season 6’s first half got a little fuzzy.

Here’s what you need to remember for the episodes ahead. Dwight and Sherry are on a Break…

After Dwight (Austin Amelio) spent a very, very long time trying to find his wife Sherry (Christine Evangelista), they finally reconnected… only to go their separate ways. Turns out Dwight’s not a huge fan of the ruthless methods Sherry’s new group is using to take down current villain Virginia (Colby Minifie), while Sherry just wants to prevent another unhinged baddie like Negan (Jeffrey Dean Morgan) from wreaking havoc. Since they couldn’t see eye-to-eye, they took a step back from their relationship.

…and so are June and John

Perhaps even more heartbreaking is newlyweds June (Jenna Elfman) and John’s (Garret Dillahunt) recent separation, mostly because they didn’t even really talk about it first! John, convinced that being in Lawton and dealing with Ginny was killing him slowly and facing guilt over not being able to solve Cameron’s murder, tried to convince his wife to run away with him back to his peaceful little cabin. But June, hoping to get a hospital from Ginny because she saved her life, wasn’t willing to make the trip. So, John simply drove off without her. See AlsoAMC Unveils ‘Fear the Walking Dead’ Season 6B Key Art & Teaser (VIDEO)
Plus, a first glimpse at the key art, and a divided family.

So really, every single couple on this show is struggling. While we didn’t see Grace (Karen David) for almost the entirety of 6A, we saw in the final scenes of the seventh episode that Ginny’s been keeping her locked up behind a false wall in Lawton. We’re not quite sure how long she’s been there, but it seems safe to say she’s still under the impression her love, Morgan (Lennie James) is dead when he most certainly is not. Oh, and she’s pregnant, in case you forgot!

While she hasn’t actually seen the woman she connected with, Isabelle (Sydney Lemmon), again, Althea (Maggie Grace) has talked to her through the radio to warn her about a building that was infested with the bubonic plague (though Isabelle didn’t know it was Al). It’s possible Al’s investigation into CRM could continue in 6B. Strand and Alicia Aren’t Getting Along

Blame Virginia. Survivors Strand (Colman Domingo) and Alicia (Alycia Debnam-Carey) have perhaps the closest friendship on Fear, but right now, they’re not exactly best buds. As one of Ginny’s rangers, Strand kept promising he would do “damage from the inside,” but Alicia got tired of waiting for him to act against Ginny. They argued, they’re not really on good terms, and they’re not even in the same location when 6B picks up.

Morgan’s Getting More and More Ruthless

In his desperation to reunite with Grace and their unborn child, Morgan is getting more and more violent. He took down an entire convoy of Ginny’s rangers, decapitated a bounty hunter and was willing to use young Dakota (Zoe Colletti) as a bargaining chip in negotiations with Virginia, despite the fact that Dakota was trying to get away from her big sis. Daniel’s Playing the Game of Survival

The old Daniel (Rubén Blades) is back, and he’s tricking everyone into thinking he’s a senile old man with amnesia. Really, he’s gathering intel on Ginny to help Morgan.

Ginny had a tough time in Tank Town when she was bitten on the hand by a walker. At first, June was going to let her turn, but Ginny managed to convince the do-gooder nurse to save her by offering her anything she wanted; June, of course, chose to ask for a hospital where she could treat her patients. In other interesting Ginny-related tidbits, we also found out from Dakota that Ginny killed their parents.

Strand’s Gone to the Dark Side

Without Alicia to remind him of who he is, it seems the mercurial Strand has gone all-in on Ginny’s side. In the last episode that aired, he made it clear his loyalties lay with her, and he seems poised to start rounding up his friends and bringing them back to Ginny. It remains to be seen whether this is all part of a bigger plan, or if he’s really been seduced by the power and luxury of Lawton life.