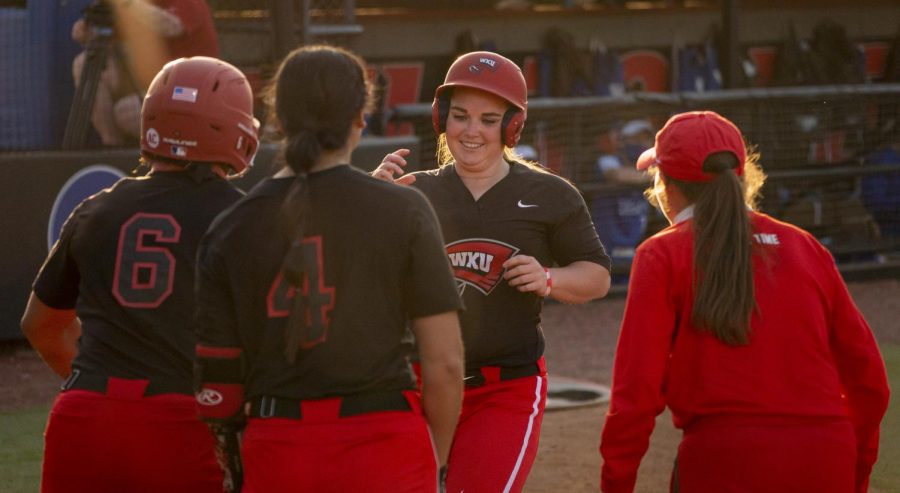 WKU outfielder, Paige Carter (26) led the game off with a homerun during the game against Kentucky on Wednesday, March 24, 2021.

WKU Softball (23-12), (6-6, C-USA) dropped the final game of a four-game away series against Conference-USA rival FIU (13-24), (5-11, C-USA) by a score of 3-2 on Sunday afternoon. The loss broke a five-game winning streak and the Hilltoppers will leave Miami, Florida sitting at .500 in conference play.Redshirt freshman Katie Gardner made her second start in a row and pitched for three and two-thirds innings, keeping FIU to three runs on six hits and collecting five strikeouts before being relieved by redshirt junior Shelby Nunn in the bottom of the fourth inning.

Redshirt sophomore Kennedy Sullivan singled to drive in redshirt senior Paige Carter to put the Hilltoppers ahead 1-0 in the top of the first inning. Redshirt sophomore Kendall Smith was then hit by a pitch to load the bases with no outs and FIU was forced to make an early pitching change. A double-play and a ground-out would prevent the Hilltoppers from capitalizing, however.

Paige Carter hit her 14th double of the year to lead off the top of the third inning but the redshirt senior ended up stranded on the baseplates due to a double-play.

FIU took a 3-1 lead due to a two-out, two RBI single in the bottom of the third inning. Gardner kept her composure and put an end to the inning by ringing up her fourth batter of the game.

Nunn relieved Gardner in the bottom of the fourth inning with runners on second and third with two outs and induced a ground-out to close the frame. Redshirt sophomore Princess Valencia hit a pinch-hit single in the top of the fifth inning and redshirt freshman TJ Webster stole third base after getting on board with a bunt single, but no Hilltoppers were able to score.

Freshman Kennedy Foote reached first base with a walk in the top of the sixth inning, but was left stranded. Shelby Nunn picked up a pair of strikeouts in the bottom of the sixth and the Hilltoppers entered the seventh inning looking to stay alive.

Princess Valencia led off the inning by drawing a walk and redshirt sophomore Taylor Davis was subbed in to pinch run for her. TJ Webster reached first on a fielder’s choice and Davis was put out at second. Paige Carter then hit her second double of the day and 15th of the season to drive in Webster to cut FIU’s lead to 3-2.

Carter would end up stranded at second due to a strikeout and fly-out to end the game. Besides the redshirt senior’s pair of doubles, redshirt sophomore Jordan Ridge would contribute two hits of her own in the loss. Shelby Nunn threw two and one-thirds scoreless innings of relief work, picking up two strikeouts and allowing just one hit.

The Hilltoppers will return to Bowling Green for their final Conference-USA series of the year against FAU on May 7-9. It will be WKU’s last regular-season series before the team hosts the Conference USA Softball Championship on May 12-15.