A look at WKU Football’s newest set of signees 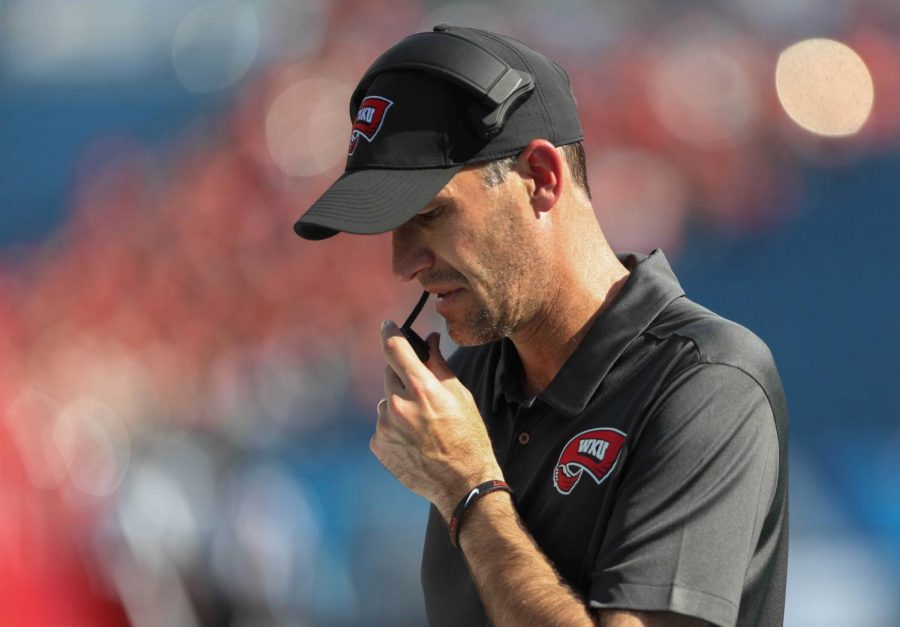 WKU Head Coach Tyson Helton reviews his notes during WKU's 38-21 loss to the Louisville Cardinals in Nissan Stadium in Nashville on September 14, 2019

WKU Football announced the official signing of five players, all of them transfers, for its upcoming season on Tuesday. The Hilltoppers’ current signing class now includes 19 players, 17 of which are transfers. Below is a breakdown of each of the newest members of WKU’s football roster.

Ratzlaff contributed to the most explosive offense in all of FCS, notching 126 catches for 1,538 yards to go along with 15 touchdowns over 16 games.

“You take football as serious[ly] as possible,” Ratzlaff told Bowe Fertig of the Prep Pigskin Report in November 2020. “A lot of kids come in and they think it’s going to be the same thing, they try to do the same thing they did in high school and that’s not going to work.”

“Take everything to the next level.”

Hailassie played on the punt return unit and at cornerback during his freshman year at Oregon in 2018. Hailassie completed 31 snaps and made a tackle in the Duck’s season opener against Bowling Green State. Hailassie then transferred to Independence Community College where he was then signed by WKU.

According to ESPN.com, Hailassie was rated the 81st best cornerback recruit in the nation in 2018 and the overall 102nd best recruit in the state of California.

Cooper played in Nebraska’s last seven games in 2020 and finished the year with three tackles. Cooper put together 24 tackles for Hutchinson Community College in 2019, including nine tackles for a loss, 2.5 sacks and two forced fumbles.

According to 24/7 Sports, Cooper was ranked the 15th best recruit in Tennessee and 66th best recruit nationally in its 2020 composite ranking. 24/7 Sports also ranked Cooper as the third best weak-side defensive end prospect in 2020.

The Memphis, Tennessee native joins fellow Nebraska transfer Boe Wilson on the Hilltoppers’ roster. Cooper announced via twitter on March 21 that he was entering the transfer portal in hopes to join a program closer to home in order to help his family take care of his mother.

Baker appeared in eight games and made five starts over two seasons for the San Diego State Aztecs. Baker completed 78 of his 128 passes for 789 yards and a completion rate of 61%. Baker threw four touchdowns and three interceptions respectively.

Baker’s first start came during his freshman year in 2019 while taking over the starter role from an injured Ryan Agnew in the Aztec’s season finale against BYU. Baker completed 19 of his 24 passes for 172 yards and a touchdown in the 13-3 victory on November 30, 2019.

Baker started the Aztec’s first four games of the 2020 season and appeared in two others. Baker completed 59 of his 104 passes during that span, throwing three touchdowns and three interceptions. His best showing came on November 6 against San Jose State when Baker threw for a career-high 261 yards while completing 21 of his 30 passes along with a rushing touchdown.

“They told me that in the spring my reps would be limited — not limited but they were going to give the guys who fit the offense the chance more than me,” Baker told Kirk Kenney of the San Diego Union-Tribune when explaining his decision to enter the transfer portal. “I just felt like this is the right move for me.”

Baker joins six other quarterbacks on WKU’s roster, including a trio of freshmen in Grady Robinson, Chance McDonald and Darius Ocean, redshirt sophomore Drew Zaubi, and graduate student Bailey Zappe. Former WKU starting quarterback Tyrell Pigrome entered the transfer portal on March 31 and may not be rejoining the Hilltoppers’ roster in the fall.

Abdur-Rahman played two seasons for the Fighting Irish but only appeared in Notre Dame’s 52-0 defeat of South Florida on September 19, 2020 where he failed to record any statistics.

Abdur-Rahman was twice an All-State selection in high school, rushing for 1,135 yards and 19 touchdowns as a senior in 2018. 10 of those touchdown runs went for more than 40 yards and five of them went for over 80 yards.

Coming out of high school in 2019, 24/7 Sports ranked Abdur-Rahman as the 31st best athlete nationally and 8th best from Illinois while ESPN.com ranked him the 42nd best recruit in the Midwest.