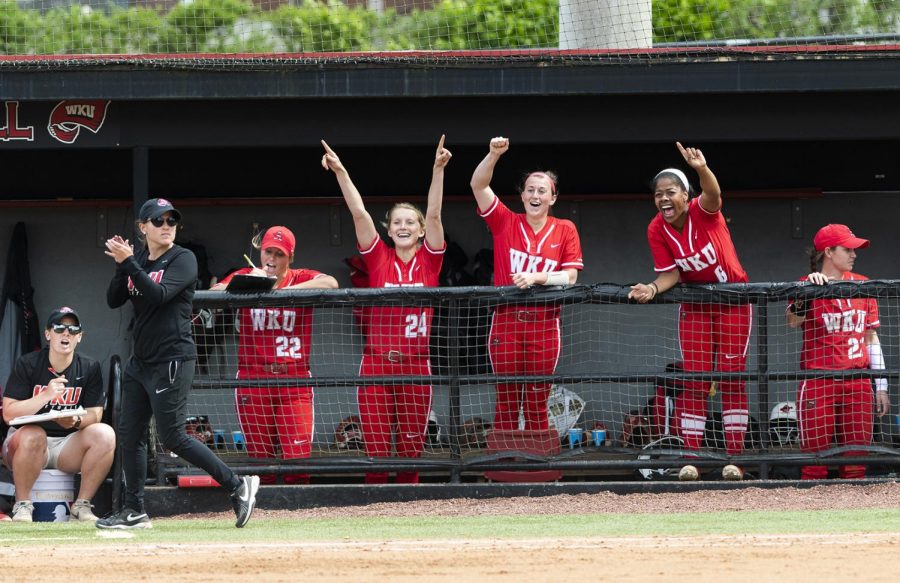 The WKU softball team cheers from the dugout after a successful bunt from Kennedy Sullivan against North Texas on Sunday. The Hilltoppers went on to win 8-0, advancing their conference record to 12-3.

A record six members of WKU’s softball program were named to the Conference USA All-Second Team, the league announced on Tuesday.

The trio combined for 22 of WKU’s 27 victories during the regular season. Aikey led the team with 92 strikeouts during the campaign and Sullivan held opposing batters to a miniscule .157 batting average, the best mark in all of C-USA, while also hitting three walk-offs. Sullivan (2.01) and Nunn (2.25)’s ERAs were fifth and eighth lowest in the conference respectively.

Redshirt junior catcher Kendall Smith, redshirt junior infielder Maddie Bowlds and redshirt senior outfielder Paige Carter were also selected. Smith and Carter started in all 39 of WKU’s games during the season and Carter led the team in hits (50) and doubles (17), a new program record. Her slash line of .382/.478./.763 led the roster in all three metrics. Carter and Sullivan both led the team with 11 home runs apiece.

Smith caught nine runners stealing throughout the season and put together a fielding percentage of .996. Bowlds helped to complete a team-best nine double plays during the year and compiled 33 hits, six doubles and four stolen bases.

This is the first time that Nunn, Carter and Bowlds have earned All-Conference nods. Sullivan was awarded All-Freshman honors in 2019 and Smith made the All-Conference First Team that season as well.

Charlotte’s junior catcher Bailey Vannoy was given C-USA Player of the Year honors. Pitcher of the Year, Freshman of the Year, Newcomer of the Year and Coach of the Year awards were all given to members of North Texas’ roster, the most awards won by a program in a single season in conference history. The full list of awards can be found here.