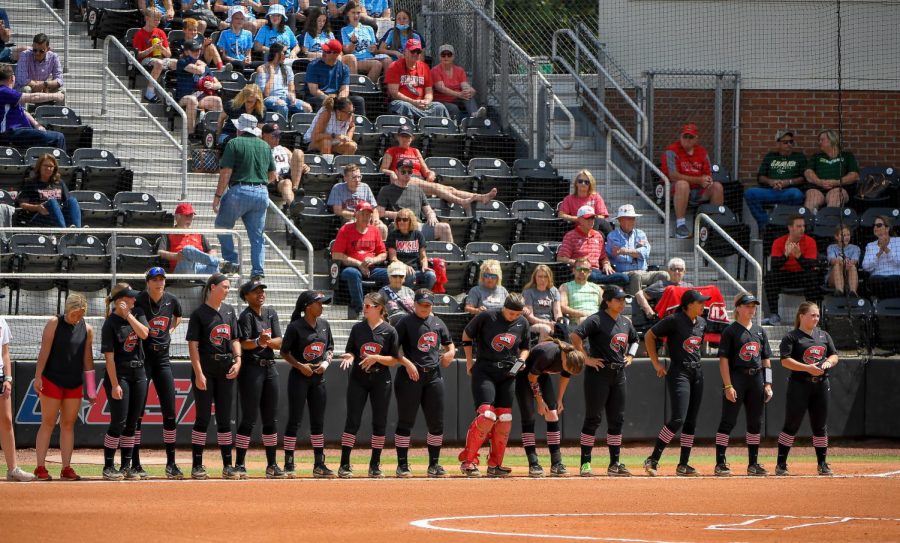 WKU Softball earned a spot in the 2021 Conference USA Softball Championship title game by winning its rematch against the no. 1 seed North Texas Mean Green by a score of 4-2 on Friday evening. The Hilltoppers defeated the no.3 seed Charlotte 49ers earlier in the day by a score of 3-2 in a tense thriller in front of a raucous crowd.

“You’ve got to find ways to win,” head coach Amy Tudor said after her team’s pair of victories. “It’s tournament time and everybody is fighting for the same thing… I was really proud of our bunch today, doing the little things right.”

“This feeling is unreal,” redshirt sophomore Jordan Ridge said. “We’ve just put so much hard work into everything… this feeling, you can’t explain it.”

Redshirt sophomore Kennedy Sullivan made her second start of the tournament against the 49ers. The two-way player had thrown three innings in the Hilltoppers’ 3-2 defeat of the UTSA roadrunners on May 12. Sullivan put together 6.1 innings and struck out five Charlotte batters before being taken out in the bottom of the seventh.

Jordan Ridge got aboard with a walk in the top of the first inning but was left stranded. The 49ers put runners on first and second with no outs in the bottom of the inning but both runners ended up stranded after three straight pop-outs.

Redshirt junior Maddie Bowlds reached on a fielding error in the top of the second and redshirt freshman Brylee Hage sent her to third base with a single. Hage then stole second to put runners on second and third with two outs but both base runners ended up stranded.

Sullivan surrendered a two-out walk in the bottom of the second but redshirt junior catcher Kendall Smith caught the runner attempting to steal second base to end the inning.

Redshirt senior Paige Carter drew a leadoff walk to begin the third inning and a sacrifice bunt from Jordan Ridge sent her to second base. Kennedy Sullivan reached first base on a fielding error that allowed Carter to score, giving the Hilltoppers a 1-0 lead.

Sullivan struck out her first batter of the day to begin the bottom of the inning. Charlotte junior and Conference USA Player of the Year Bailey Vannoy laced a one-out double to center field to give the 49ers a runner in scoring position. Kendall Smith then picked off Vannoy at second to clear the bases, her second pickoff of the day.

“We’ve been working on that non-stop during practices,” Ridge said when asked about her and teammate Kendall Smith’s defensive performances. “It’s just awesome to be able to see that come through today.”

Sullivan then surrendered a single and a double to put runners on third and second with two outs but a fly-put to Carter in right field ended the inning.

Brylee Hage broke through for a two-out single in the top of the fourth but was caught stealing second base to end the frame. Sullivan surrendered a one-out walk in the back half of the inning but her defense executed a clean double play to send the game to the fifth.

Paige Carter hit a single into left field in the top of the fifth and reached second on an error during Sullivan’s at-bat. Sullivan then drove Carter in with a double down the left-field line to give the Hilltoppers a 2-0 lead

Brylee Hage led off the seventh with a double, her third hit of the day. Redshirt freshman sent Hage to third with a sacrifice bunt and Jordan Ridge sent her home with a two-out single to extend WKU’s lead to 3-0.

The 49ers cut WKU’s lead to 3-1 in the final frame with an RBI single and redshirt junior Shelby Nunn came in to relieve Sullivan with one out and runners on first and second base. A wild pitch allowed the runners to advance and Charlotte’s Vannoy was walked to load the bases.

The Hilltoppers got the second out at home plate with a fielder’s choice but a wild pitch in the next at-bat allowed Charlotte to cut the lead to 3-2. TJ Webster tracked down a pop-fly in shallow center field to end the game and advance the Hilltoppers to a rematch with no. 1 seed North Texas.

“It was very nerve-wracking,” Hage said when asked about the game’s tense seventh inning. “But Nunn, I knew that she could do it.”

Brylee Hage was a perfect 3-for-3 at the plate with a double and Carter, Ridge and Sullivan all contributed a hit each in the win. Sullivan threw 6.1 innings while collecting five strikeouts and Nunn earned the save.

“I really was just trying to go out there, and if the first pitch was there, just hit the first pitch,” Hage said about her performance at the plate. “If I let myself get down in the count I’ll swing at balls, so I would just really try to hit that first pitch.”

“Brylee just attacked the ball,” coach Tudor said. “She changed her approach a little bit, she’s coachable, she’s fun to watch, she’s got some speed being left-handed, she kept everything simple and did a fantastic job for us today.”

The Hilltoppers faced North Texas senior Hope Trautwein for the second time in as many days. The righthander held the Hilltoppers to just two hits and one run during the two team’s first meeting on Thursday.

Shelby Nunn was given the start for WKU. Nunn had only lasted one-third of an inning against the Mean Green in her Thursday start but put together a massive bounce-back performance. Nunn threw for seven complete innings, the first two of which were hitless, and held the Mean Green to just one run on two hits and collected a pair of strikeouts while surrendering zero walks.

Nunn shared after the game that her performance was for fellow pitcher redshirt senior Kelsey Aikey, who has been unable to pitch in the tournament due to injury.

“I actually texted her this morning and I was like, ‘this one’s for you, I wish you were able to go out there’,” Nunn said. “Back in the past we’ve always referred to each other as the Dynamic Duo since we’re so different from each other, this one today is for the Dynamic Duo.”

“[Aikey] is so helpful in everything she does, just hearing her voice is just a reliever when I’m out there on the mound.”

Kennedy Sullivan hit her 12th home run of the season to give the Hilltoppers a 1-0 lead in the top of the first. Kendall Smith drew a walk after the home run but was left stranded. The Mean Green were retired in order in the back half of the inning and Nunn picked up her first strikeout.

“All the kudos in the world for [Sullivan],” Nunn said about her teammate’s home run. “I know I wouldn’t have been able to do it so I’m glad she was able to do that for us, I think that really lit a fire underneath us, like ‘hey we can do this, so let’s have fun doing it.’”

Brylee Hage hit a one-out double in the top of the second, her fourth hit and second double of the day, but was left stranded at third. The Mean Green went down in order once more and Nunn picked up her second strikeout in the back half of the second.

The Hilltoppers went down 1-2-3 in their side of the third. North Texas freshman Ashlyn Walker broke through for the Mean Green’s first hit of the day and sophomore Candain Callaway reached on an error to put runners on first and second with one out in the bottom of the third. A fielding error allowed UNT freshman Mikayla Smith to score and tie the game 1-1. A groundout to second would end the inning.

The Hilltoppers were retired in order for the second time in a row in the top of the fourth. North Texas freshman Kailey Gamble led off the bottom of the inning with a solo home run to give UNT a 2-1 lead.

The Hilltoppers were retired in order for the third inning in a row to open the fifth and the Mean Green followed their lead. Paige Carter led off the sixth with a walk and Jordan Ridge drove her home with a triple to tie the game 2-2. Ridge then scored on a sacrifice fly from Kendall Smith to give the Hilltoppers the 3-2 lead.

The Mean Green went down in order in the bottom of the sixth on three straight ground-outs. Brylee Hage hit a one-out single in the top of the seventh and reached second on a fielding error. Taylor Davis then singled to put runners on the corners with one out. North Texas then held an infield meeting and Kendall Smith came out of the dugout to lead the home crowd in a cheer.

Redshirt sophomore Princess Valencia hit a pinch-hit RBI single to score Hage from third and the Hilltoppers entered the final frame up by a score of 4-2. The Mean Green were retired in order, securing the Hilltopper victory.

Nunn finished with a compete-game, two-hit performance and collected two strikeouts while walking no one. Nunn only needed 74 pitches to go a full seven innings and 16 of North Texas’ 21 outs came on ground-outs.

“She attacked the zone today, we played great defense behind her,” coach Tudor said. “Her mindset shifted. Really proud of her today.”

Hage had a two-hit performance and Ridge, Valencia, Davis and Sullivan all contributed a hit apiece with Ridge’s hit coming from a triple to round out the Hilltoppers’ 30th win of the season.

“I felt like our approach was different, I felt like our confidence was higher,” coach Tudor said after the victory. “We gave ourselves a chance to win the game and I felt like a lot of our players stepped up. It was a full team victory.”

The Hilltoppers will play the no. 2 seed UAB Blazers at noon on Saturday to crown a Conference USA champion. WKU swept UAB in three games during the regular season.