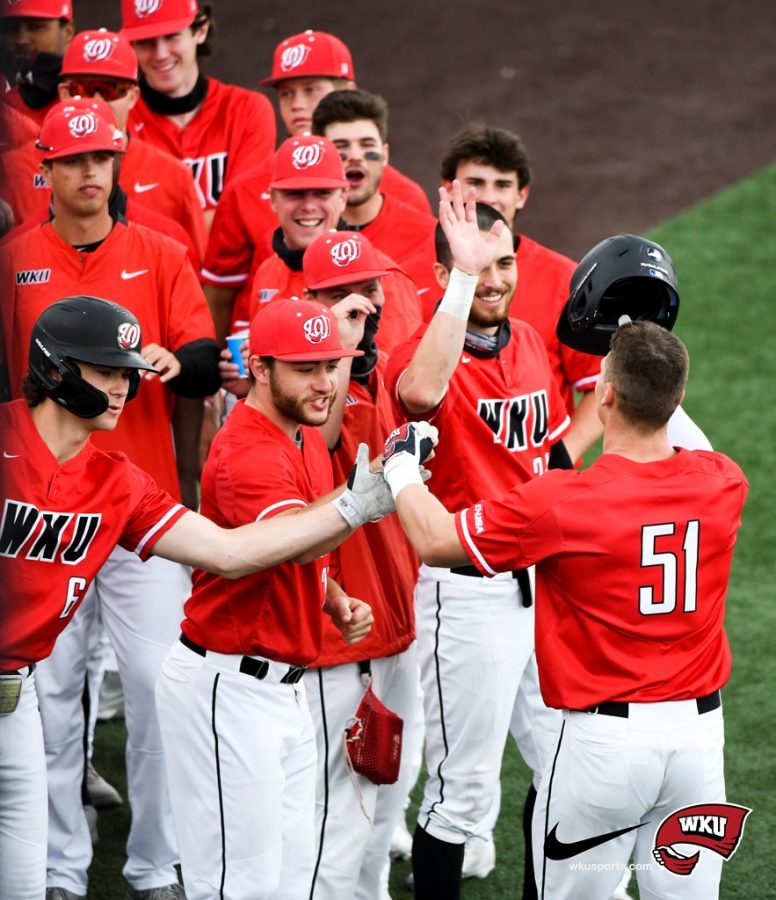 “Really proud of our group, first of all the seniors, the guys that have put their heart and soul into our program,” head coach John Pawlowski said after the game. “They’ve left a tremendous footprint on our program…It’s never easy when the final out is made.”

WKU junior Dalton Shoemake got his first start of the 2021 season. He tossed for 2.1 innings allowing two runs on four hits, while striking out one Bulldog batter.

Senior Jarret Whorff got the start for La Tech. He pitched for 6.1 innings, allowing just three runs on six hits while striking out three Hiltoppers.

WKU sophomore Jackson Gray had a two-hit performance with a triple and a double. Graduate student Davis Sims contributed a pair of hits as well.

Three different Bulldogs hit home runs, one of which was a two-run walk-off home run from sophomore Jorge Corona.

“You look at the way we started, we opened up [conference play] 2-6 against Charlotte and FIU, we were two-and-six after our first two weekends and eight games,” Pawlowski said. “We moved forward, they kept working, they kept grinding and we ended up being one of the top eight teams to go to the tournament, we finished sixth during the regular season and those are some tremendous accomplishments.”

Both teams left a runner stranded on base in the first inning. WKU junior Justin Carlin made it to third base while senior Parker Bates was left stranded at first after Carlin made a sliding catch in right field.

After the Hilltoppers went three up and three down, the Bulldogs took a 2-0 lead in the bottom of the second frame with a two-run homerun from junior Philip Matulia.

Both teams went three up and three down in the fourth inning.

The Hilltoppers went three up and down in the top of the fifth frame for the second consecutive inning. Redshirt junior Michael Darrell-Hicks relieved O’Connell for WKU after Bates hit a lead-off double in the bottom of the fifth inning. Bates scored after advancing to third, extending the Bulldog lead to 6-0 on an infield single by Cole McConnell.

In the top of the sixth frame,  WKU got its first hit since the first inning on a single by senior Kevin Lambert. Lambert advanced to third on a double by Jackson Gray before both were left stranded after an infield pop up. Redshirt junior Collin Lollar relieved Darrell-Hicks in the bottom of the sixth for WKU. Lollar sat La Tech down in order in his first inning of relief.

Sophomore Jackson Swiney and Davis Sims led off the top of the seventh with a single and double respectively before Swiney scored on Bulldog senior Taylor Young’s first error of the season. Senior Richard Constantine batted in Sims on an RBI single to cut the lead to 6-2.

Senior Kyle Crigger came in to relieve Whorff after he got injured after walking a WKU batter. Kyle would give up one run on a Ray Zuberer III ground out before stranding a WKU runner at third base.

The Bulldogs' lead has now been cut in half in the top of the seventh following Zuberer's RBI groundout!

La Tech would get the bats going with two outs in the bottom of the seventh with a McConnell single followed by an RBI double from senior Manny Garcia to the Bulldog lead to 7-3. Garcia then scored on a RBI double by Jorge Corona. La Tech led 8-3 after seven innings of play.

In the top of the eighth inning, Gray led off with a triple before cutting the Bulldog lead to 8-4 on an RBI single by sophomore Matthew Meyer. WKU loaded the bases with two outs after a single and a walk before Lambert hit a ground ball for a close force-out at second base.

La Tech began the bottom of the eighth with two consecutive singles before redshirt senior Hunter Wells hit a two-run RBI triple to extend his team’s lead to 10-4. The Bulldogs would score two more runs to extend their lead 12-4 before run-ruling the Hilltoppers with a two-run home run from Corona.

Jorge Corona walks this one off! @LATechBSB survives and advances! pic.twitter.com/hLJByhdPor

“We will sit down and we will figure out a game plan for all the players, whether we think they should go off and play summer ball or whether they should stay back and live where they [have] schoolwork to do,” Pawlowski said.